It's Wednesday, it's Hump Day, it's D.J. Jamison's turn in the Hot Seat…

The middle. As a pantser, I usually have a strong beginning and a vision of the ending, but the journey between is a murky haze I have to navigate. I write a book lot like putting together a puzzle. I build some of the edges, I start adding pieces to the middle, filling in more and more holes until I have a complete picture.

Outlining, unfortunately. I've tried a few times to plan more before writing, but I tend to lose excitement for the story if I nail down too many details. Initially, I'm channeling a character or a scene and just letting it take me somewhere. I have some major turning points to the story in mind, but I can't GPS my stories. Which is kind of ironic, because I can't live without GPS when driving somewhere!

It varies from book to book, but I have done both online research, as well as interviews. For example, I picked the brains of three different nurses when I started the Hearts and Health series, especially for Heart Trouble and Urgent Care, the two books that focused more on medical care. I tend to be more of a “research as you go” author, rather than dedicating hours to research before I start.

I absolutely believe it contributes to a buyer's decision to click. That's what makes it so agonizing! My husband has designed most of my covers, and in the very early days of publishing, I made some of my own. This adds to the challenge, because the cover is a very personal process for us. I keep daydreaming about hiring an outside designer, simply to relieve some of the angst at home, but I probably won't do that until I start a new series.

Sadly, I'm not reading anything right now, which is unusual for me. I tend to average three or four books a week. I'm just kind of floundering in the wake of all the turmoil in our genre right now. I hope to soon snap out of it. As for what's next: I'm looking forward to Annabeth Albert's new release in her Uniforms series.

For your chance to win a backlist ebook from D.J answer this question…what's your favourite trope? 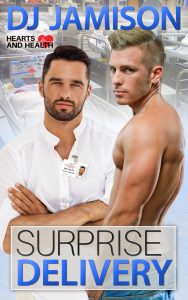 Dr. Casper Rollins knows how to have fun. The love of his life, Kage Myers, lived every moment to the fullest before he died. Now, Casper goes skydiving, mountain-climbing or on other adrenaline-soaked adventures when he wants to feel closer to his lost love.

Medical director Eric Holtz is married to his work — so much so his husband left him. But when his niece shows up, pregnant and in need of an ally, Eric suddenly has family again. Unfortunately, her obstetrician, Casper Rollins, is sexy enough to turn Eric into a blushing adolescent.

What begins as a game to break Eric of his workaholic tendencies escalates into scorching sex and feelings that can't be ignored. Casper never planned to give his heart to anyone other than Kage, and Eric won't accept anything less.
If these two want a future, they'll have to embrace the lesson Kage taught Casper long ago: You only live once.

DJ Jamison worked in newsrooms for more than 10 years, which helped tremendously when she began her series centered on The Ashe Sentinel, a fictional small-town newspaper in Kansas. She lives in the Midwest with her husband, two sons and three glow-in-the-dark fish.