It's Wednesday, it's Hump Day, it's time for another author's turn in the Hot Seat, welcome Crystal Lacy!

I'd probably have to say Sailor Moon, even though it's been a while since I've watched it. This show means so much to me because it was my introduction to LGBTQ characters. It also introduced me to fandom and I spent many of my pre-teen to teenage years happily fandoming with some really lovely people. This informed my attitude and approach towards online friendships, and I think that's a huge reason why I'm able to let myself be vulnerable and reach out to people.

An author friend visited Hawaii for the first time and I brought her a paperback copy of Brave for You, a tiny wooden pineapple, and a small Hawaii-made notebook with shave ices printed on the cover.

I honestly tend to be one of those people who save the research until the end. This isn't really ideal, ahaha. Most of the time I write about things I know. So far all my characters live in Hawaii and are of ethnic backgrounds that I'm very familiar with. Nate from Brave for You is in construction because that's what my husband does. The MC in my second book, Change for You, is an accountant because I spent three years in public accounting. If I don't know something, I fake it and then look it up and fix later, but I try not to let myself be bogged down by research before I begin a book.

What was your hardest scene to write?

The first third of the book is always easiest for me, and then it's all downhill from there, ahaha. Probably my toughest scene from Brave for You is towards the end, when Nate and An are faced with An's disapproving parents and Nate has to convince them to give him a chance. I had a very clear image of the resolution for this in my head, but executing it with words was tricky.

So so so many! I collect WIPs the way my sister collects handbags. Right now I'm working on three half-finished projects–Oahu Lovers Book 3, an exclusive Radish serial, and a mini-serial I'm writing for my FB group. If you mean how many abandoned projects, I'll have to say that I have two manuscripts which will never ever see the light of day, unfortunately.

For your chance to win an ebook copy of Crystal's Brave For You, answer this question…What's your favourite TV show and why? 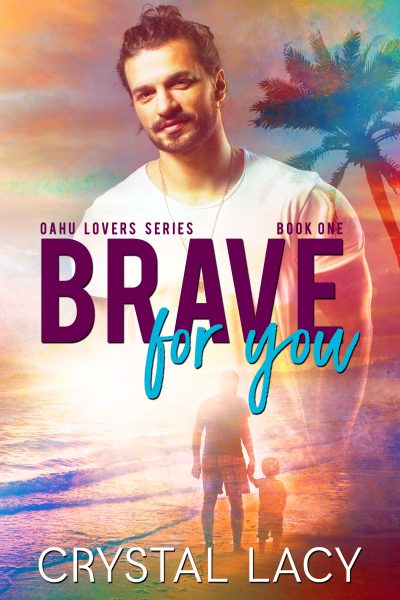 Brave For You – Oahu Lovers Series Book One – OUT NOW

Less than a year after moving to Hawaii, construction foreman Nate Ellison’s wife leaves him and their infant son for another man. Months into single-fatherhood, Nate meets Andrew “An” Hoang and is slowly drawn into An’s life. Through An’s friendship, he finds himself finally enjoying his new home in paradise.

An Hoang hasn’t had a real relationship in years. With his pediatrics practice and a niece to care for on his days off, he doesn’t have the headspace for more than a simple roll in the sack. But when he meets Nate—who just happens to be the gorgeous construction worker he encountered in the lobby of his apartment building—something about Nate makes it impossible for him not to care. When Nate needs An’s help with his son, An doesn’t refuse.

What happens when Nate’s past and An’s old-fashioned parents interfere just as the two men begin to fall for each other? Will they find the means to be brave and give their love a chance to flourish?