It's Wednesday, it's Hump Day and today's guest is the lovely Chris Quinton…

Yes, I do, though I prefer to call it postponed and put on the back burner. At the moment, My SF novel, Interface, is on the backburner. It has stalled, but I will go back to it. Plot ideas? Too many. Most of them have their own folder on Dropbox – at the last count, it was over fifty…
And here I’d like to give Dropbox a shoutout. I work direct to Google Drive on my tablet when I’m away from the house, and to Dropbox when I’m home on my desktop, and having all my stuff stored on the cloud as well as backups on external drives, has saved my work and sanity more than once. I can’t recommend it and its fellow clouds enough.

Oh, yes. See the above re the fifty+ plot ideas… Currently, although I’m working on Pyewacket, book #3 in my Melusine’s Cats series, I’m being ambushed by several characters who’ll feature in future M’s Cats books. Some of them have walk-on parts in Pyewacket, and two are waiting in the wings for their own book.

A bit of both. I usually have the beginning and the end in my head, plus a few key scenes from within, but how my characters get from A to B to C to D and other points between, well, that’s usually in the laps of the gods.

Oh, that’s a hard one, and I’m going to have to list a handful. In no particular order –
Supernatural: I love the dynamic between the brothers, their background and history, and most of the recurring characters around them, despite the sometimes idiotic directions the writers and producers send them.
Marvel’s Agents of SHIELD: Great cast, great characters, and great storylines. I’m a huge fan of the Marvel franchise, and all of their TV ventures have been good to excellent with, IMO, one notable failure. The same goes for all the Marvel movies as well – all but one are very good.
The Expanse: an excellent nuts-and-bolts SF series. No squeaky-clean ships here.
Star Trek Discovery: again, an excellent TV series, harking back in a lot of ways to the original feel and ethos of the original TV series.

Fanfic – Yay or Nay, if yay which is your favourite fandom?

A very definite YAY from me. AO3 [Archive Of Our Own] is one of my favourite websites. Currently, I’m working my way through the longer offerings in the Marvel Universes – the longer the better. But I do have to be careful. It’s too easy to fall into a reading frenzy when I find a particularly well-written epic with sequels…

For your chance to win an ebook of Greymalkin answer this question…fanfiction, yay or nay? If yay, which is your favourite fandom? 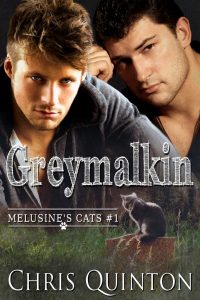 The mutual attraction between Jesse and Will is a bonus for Melusine when her enemies close in and she needs to rebuild her war band—starting with Jesse, Will, and Greymalkin.

Melusine, a deity of rivers and seas, long ago lost the Battle of the Betrayal and is imprisoned in a nexus centred on the source of the Lynn River. She can only travel in the flowing water of her river, and cannot set foot on her banks. Her cats are not so bound. Neither pets nor familiars, they move freely between the realities, her agents among the humans who live along the Lynn.

When Melusine's enemies come to the valley in search of revenge, Jesse and Will discover they have a part to play in the ancient feud. Do they commit to becoming part of a mythical triad, or leave the valley and forget they ever knew that magic exists?

Chris started creating stories not long after she mastered joined-up writing, somewhat to the bemusement of her parents and her English teachers. But she received plenty of encouragement. Her dad gave her an already old Everest typewriter when she was ten, and it was probably the best gift she'd ever received – until the inventions of the home-computer and the worldwide web.

Chris's reading and writing interests range from historical, mystery, and paranormal, to science-fiction and fantasy, writing mostly in the Gay genre. She also writes the occasional mainstream novel in the name of Chris Power. She refuses to be pigeon-holed and intends to uphold the long and honourable tradition of the Eccentric Brit to the best of her ability. In her spare time [hah!] she reads, or listens to audio books while quilting or knitting. Over the years she has been a stable lad [briefly] in a local racing stable and stud, a part-time and unpaid amateur archaeologist, a civilian administrator at her local police station, and a 15th century re-enactor.

She lives in a small and ancient city not far from Stonehenge in the south-west of the United Kingdom, and shares her usually chaotic home with her extended family, three dogs, a Frilled Dragon [lizard], sundry goldfish and tropicals.