Well, I remember the first film that made me cry, which was Born Free. I recall a huge queue of children with their parents heading for the toilet – were we being taken there to be cleaned or splashed with cold water or just to get us out of the way? That bit escapes me.

I fail to recollect the first book that made me cry, although I did get in a right lather about the end of Lord of the Rings, when Frodo goes sailing into the west without Sam. *sniff*

I used to love books of myths and legends. I had one about King Arthur (may still have that somewhere) and was very taken with Galahad and the rest. Sir Bors, he was a good ‘un, too. There was also a book by Robert Graves that had all the Greek myths retold for children (all the rude bits taken out, no doubt).

But my absolute favourite childhood reading was my big brother’s comics. I learned to read before I went to school, just by following the adventures of William Wilson and ‘The tough of the track’. It’s no wonder I write about blokes.

What was the last gift you gave someone?
Ah, now. It’ll be touch and go whether the gift arrives with the recipient through the post before this post goes up and gives the game away. I was at an antiques/craft/etc fair on Sunday and saw a handmade foldable shopping bag which was crafted from material featuring classic seaside saucy postcards. I knew just the person who deserved it. (And that’s all I’m saying until it’s delivered.)

What are the ethics of writing about historical figures?

That’s a really good question. I admit that I do occasionally feature historical figures in my stories although rarely on page, as it were. There’s usually a reference to somebody meeting them and an account of what happened, or maybe some sort of veiled allusion. One of the characters in Lessons in Loving thy Murderous Neighbour, Dr. Beattie, keeps a photograph of a handsome, moustachioed man who is – in my mind – Wilfred Owen.

In all these cases, I try very hard to keep an accurate picture, based on what I’ve read about them. For example, the family Stewart are well in with royalty in my Cambridge Fellows books, and snide remarks are made about Bertie (Edward VII) and his womanising. That’s well documented and therefore fair game. If I presented him as a homosexual, that would be untrue to his nature as we understand it and therefore, as far as I’m concerned, off limits. To write about Owen and Sassoon having an affair (even though it’s unlikely they did) would be reasonable. To write about Owen and Lloyd George in a relationship wouldn’t.

The latter. Absolutely. I hate writing to a plot, because I find it so constraining – I want to start changing things everywhere. Normally I start writing a story with something very basic, like a conversation or a description of a setting. It’s like sticking a bit of yeast into a mixture and seeing what happens. Except that, when I start, I only have the yeast and no mixture to speak of.

When I write, I feel I’m either watching or listening to a story that’s being told in episodes, and I’m relating the plot as I see or hear it unfold. I sometimes run across the most amazing plot twists en route that come as a total surprise to me, let alone the reader.

For your chance to win a backlist ebook from Charlie, answer this question…What was the last gift you gave someone? 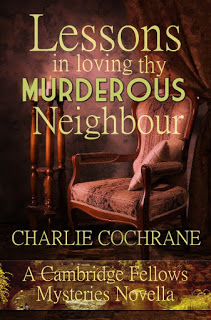 Jonty Stewart and Orlando Coppersmith like nothing more than being given a mystery to solve. But what happens when you have to defend your greatest enemy on a charge of murder?

Because Charlie Cochrane couldn't be trusted to do any of her jobs of choice—like managing a rugby team—she writes. Her mystery novels include the Edwardian era Cambridge Fellows series, and the contemporary Lindenshaw Mysteries, while her romances feature in the Portkennack series.

A member of the Romantic Novelists’ Association, Mystery People and International Thriller Writers Inc, Charlie regularly appears at literary festivals and at reader and author conferences with The Deadly Dames.

Focus on Max and the Prince (Bodyguards Inc, #3)

Christmas On The Ice – Various Authors