Thank you to R.J. Scott for inviting me to take part in Suspense Month here on her blog—and congratulations to her on her upcoming release!

I love this genre and while I do occasionally consider returning to writing something more mainstream, I can never quite summon the enthusiasm or excitement I feel when I’m beginning a new Josh Lanyon project. I’m honestly not sure why that would be, but here are the top three things I love most about writing Male/Male Mystery and Suspense.

1 – Diversity.
Granted, the mystery genre has always been edgier and more progressive than romance, but long before mainstream publishing recognized diversity as a selling point, indie—particularly indie M/M authors—were pushing the so-called “boundaries.” Hard to believe that once upon a time, M/M fiction was considered subversive! But the M/M factor was just the starting point for stories which explored race, religion, sexuality, identity, disability…you name it, there’s probably an M/M story about it. And the genre—readers, writers, publishers together—have made a conscious effort to nurture and grow and broadcast diversity even when it isn’t selling a lot of books.

2 – Romance.
The Male/Male Mystery is, by definition, half-romance novel. No need then to struggle to keep a romantic subplot from tearing off its shirt and dragging the who-dunnit into bed. Every M/M Mystery and Suspense novel packs a powerful emotional punch. It isn’t only THIS TIME IT’S PERSONAL. In the M/M Mystery, EVERY time is personal—because every story arc is at least partially dedicated to the main character’s emotional journey. It is the romantic subplot’s job to tempt and tease the mystery plot into taking dangerous chances and risking everything for love.

3 – High Stakes.
Sure, in an M/M Mystery or Suspense novel there’s the quest for justice, the search for the truth, but also there’s usually going to be danger and suspense and plenty of action. Someone is probably going to get conked over the head—or at the very least be suspected of doing something they didn’t do. Someone has died or is liable to die. Someone is going to have to rescue someone. Love not only has to find a way, it has to survive until backup arrives. The stakes just don’t get higher than that.

What about you? What do you like best about M/M Mystery and Suspense?
Comment below to be entered into a random selection for the Adrien English Box Set.

Amazon US
Audible US

First in an adorable new series!

Ellery Page, aspiring screenwriter, Scrabble champion, and guy-with-worst-luck-in-the-world-when-it-comes-to-dating, is ready to make a change. So when he learns he’s inherited both a failing bookshop and a falling-down mansion in the quaint seaside village of Pirate’s Cove in Rhode Island, it’s full steam ahead!

Sure enough, the village is charming, its residents amusingly eccentric, and widowed police chief Jack Carson is decidedly yummy (though possibly as straight as he is stern). However, the bookstore is failing, the mansion is falling down, and there’s that little drawback of finding rival bookseller—and head of the unwelcoming-committee—Trevor Maples dead during the annual Buccaneer Days celebration.

Still, it could be worse. And once Police Chief Carson learns Trevor was killed with the cutlass hanging over the door of Ellery’s bookstore, it is. 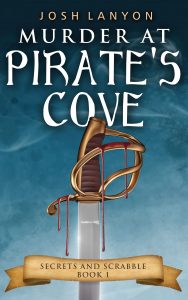 Author of over ninety titles of classic Male/Male fiction featuring twisty mystery, kickass adventure, and unapologetic man-on-man romance, JOSH LANYON’S work has been translated into eleven languages. She is an Eppie Award winner, a four-time Lambda Literary Award finalist (twice for Gay Mystery), an Edgar nominee, and the first ever recipient of the Goodreads All Time Favorite M/M Author award.
Find other Josh Lanyon titles at www.joshlanyon.com
Follow Josh on Twitter, Facebook, Goodreads, Instagram and Tumblr.