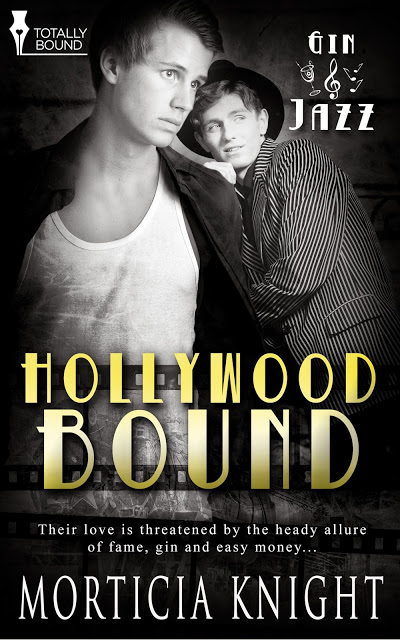 Hi RJ, thank you for having me at your blog today!

The 1920’s in the big cities of America was one big party scene. For a brief nine year span of history, decadence was the main course on the menu, despite prohibition laws. It seemed as though the more that it was emphasised that alcohol was illegal, the more it was consumed. Throw drugs into the mix, and for some, the party was over before it even got started. With promises of fame and fortune, as well as intense competition for a chance at it all, many people sold themselves just to survive. Amidst all of that, the film industry of Hollywood and the star-making machine came into its own. Never before had the general public been able to see such suave and dashing heroes or delicate and winsome heroines up so close.

There were other, lesser known aspects to the brand new glitz and glamour of Hollywood. Almost any type of sexual preference was not only tolerated, but encouraged. The conservatism that pervaded the rest of the country in general, was pretty much ignored behind the scenes in Hollywood. If you were gay, lesbian, bi or polyamorous, no one really cared, just as long as the public never found out. As early silent films became racier and racier (Erich Von Stroheim was rumoured to have filmed S&M orgies of which very little footage survived to be shown in theatres) the moral leaders of America became outraged. All performers had to sign a morals clause, and if the studio decided you had broken it – whether you did or not – you were finished.

In Book One of the Gin & Jazz series – Hollywood Bound – Jack and Nick dream of getting high paying set builder jobs at the studios. They believe their experience in off-Broadway Vaudeville theatres will make them shoo-ins at the studios. But there are other things both young men are thinking about. Jack has been secretly in love with the older, more street-wise Nick for a long time. Nick has been taking care of Jack ever since he arrived from an orphanage at the age of sixteen. Nothing has ever happened between them, and Nick is engaged to a gal back in Philly. Oddly, Nick has never gone back, and he is scared to admit why that might be. In this short excerpt the men – along with their co-worker – are working on the vaudeville sets. And Nick can’t get Jack off of his mind…

Jack and Nick
seek fortune and adventure in the silent film era of Hollywood. But their
newly-expressed love is threatened by the heady allure of fame, gin and easy
money.
Nick wiped the sweat
off his brow for what felt like the hundredth time. It was after midnight, and
they’d been working under the hot stage lights for several hours. They had to
get everything just right before they could leave, otherwise their boss Pearson
would have a fit and use that as yet another excuse not to give them their past
due wages. He was down to his last Chesterfield. They weren’t his favourite
brand of cigarette, but at five cents for ten sticks, he couldn’t complain.
When they got to Hollywood and were making the big bucks, he would only smoke
Luckys from then on.
He checked his
pocket. Thirty cents left. They were going to be in real trouble if Pearson
didn’t come through the next day. He had to wash his and Jack’s shirts, and
he’d have to feed the kid tomorrow. He’d only had coffee and a cheese sandwich
all day. Nick still felt guilty about getting the hamburger. That had been
another fifteen cents they could have saved, but Jack had insisted.
“You have to do all
of the heavy stuff at the theatre. You need to eat something good.”
I could always dip into the Hollywood money. There’s close to
fifty dollars in there.
Nick winced. It was
so tempting when his belly was grumbling and their clothes smelled like an old
hobo in Central Park, but they had to stay strong. Once they got to Hollywood
they would be okay. Things would be different.
“Hey, Nicky, whaddya
think?” Oscar yelled from the front of the stage. “I think it looks great and
that we should get the fuck outta here.”
Nick went around the
curtains that were pulled open to the side of the stage and hopped off the
front into the orchestra pit. He surveyed the backdrop and the other sliding
set pieces that had been arranged for Act One. Jack came down the aisle and
stopped next to him.
“I think it’s okay.
Whaddya say Nick?”
Nick looked down at
Jack’s innocent smiling face. Nick was about a half a foot taller than the
blond-haired, blue-eyed kid, and sometimes he felt so protective of him that he
thought it would crush his heart. No one should ever be abused the way Jack had
been. He was such a sweet guy, and he didn’t even have any family. No one to
care for him. No one except Nick.
At times it felt like
a burden—like Nick had taken on a responsibility that wasn’t his. But they had
always looked out for each other, and it was great not to have to be alone in
the city, to have someone he could rely on.
And there was the
other thing. At first, Nick had thought it was just sympathy that made him feel
so soft about Jack. Like the same way he might feel if a little puppy was lost
and left in the cold. He’d want to take it in and feed it and hold it close.
But lately he’d been wrestling with the idea that it might be something more
than that.
I ain’t no queer. I’m engaged and everything.
He and Penelope had
only ever kissed and done a little petting. It hadn’t particularly excited him,
so he thought maybe he was just one of those guys who wasn’t that much into
sex. Or maybe when he was a little older he’d like it more.
So maybe it’s just that I’m older now and Penelope’s not here,
but Jack is. Maybe that’s all it is.
He wasn’t so sure
that was it either. Because when he thought about Penelope he had a sinking
feeling in his stomach that seemed more like feeling trapped that he had to
marry her. But when he thought about Jack, his dick got hard.
I ain’t no queer. That’s all I have to remind myself of.
But it was getting
more and more difficult every single day.
****

To get your copy of Hollywood Bound: