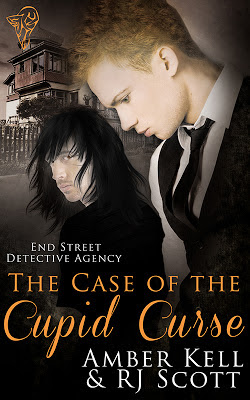 Coming Monday is my joint venture into the paranormal world with Amber Smells Kell.

As Amber said… No authors were injured in the writing of this novel. (I know surprising right?)
The buy now, read now version is coming to TEB on Monday. Here is the buy link

Sam Enderson stood outside his building and smiled with pride. The fresh sign painted on the door in crisp black letters read ‘End Street Detective Agency’. Examining the overall effect, he nodded in satisfaction. This move to becoming a private investigator was as far from being a timid bookseller as he could get. No one would walk all over someone who investigated crimes for a living.

Three months of correspondence school and a shiny new multi-weapon licence had given his confidence a much-needed boost. After the hellish past year, in which he’d found his boyfriend in bed with his now ex-best friend, followed by the death of his favourite uncle, Sam was ready for a new start in life.

Uncle Hanson. Just thinking about him made Sam feel sad. He had fond memories of visiting his uncle at work. The man had always liked Sam. He evidently had carried that affection into Sam’s adult life. After all, he had left Sam an entire building in his will, the building Sam now stood in front of. An office with accommodations over the top, it was worth quite a bit of money despite its proximity to an undesirable area.

“You should sell,” his friend Oscar had said. Oscar had had no love for Uncle Hanson. In a sniffy tone, he’d often consigned Hanson to the idiot pile and called him ‘odd’.

“I don’t want to sell,” Sam had protested.

“What are you going to do with it?” Oscar had asked.

“Open up my own agency.”

Sam sighed at the memory then mentally pushed it all to one side to admire his property. The lower half consisted of a business office and reception area, with the upper two floors divided into four apartments. Three were empty but his uncle had filled the fourth one with notes from his own investigative practice. That room was high on his list of things to sort out, but he first needed to concentrate on renting out one of the empty apartments.

Sam may have inherited the house, but it hadn’t exactly come with a burgeoning bank account to match. Forty years of being a detective and all Hanson had had to show for it was this building, a small bank account and a room full of papers. Sam was determined to be different. He even had a five-year plan in place. Sam didn’t doubt for one minute that he knew exactly why his uncle had had little money to speak of. Uncle Hanson had done too much pro bono work for them.

Filing cabinets and boxes overflowed with notes from years of being a private detective. A lot of those papers included cases involving aspects of the paranormal, things Sam thought better left alone. Sam didn’t have a drop of supernatural blood in his entire body and he didn’t plan on associating with those who did. It hadn’t exactly worked out for his uncle.

Paranormals had their place. Hell, they owned half the city. Vampires and werewolves, witches, fae and pixies—they all had their own parishes. Neighbourhoods where they lived amongst their own kind. Like enjoyed living with like, and, although they often mixed and matched, no one in Sam’s family had ever crossed the romantic boundary between the magical and the not.

Sam didn’t count his second cousin Christa, who had taken up with a blood demon. There was a bad seed in every batch.