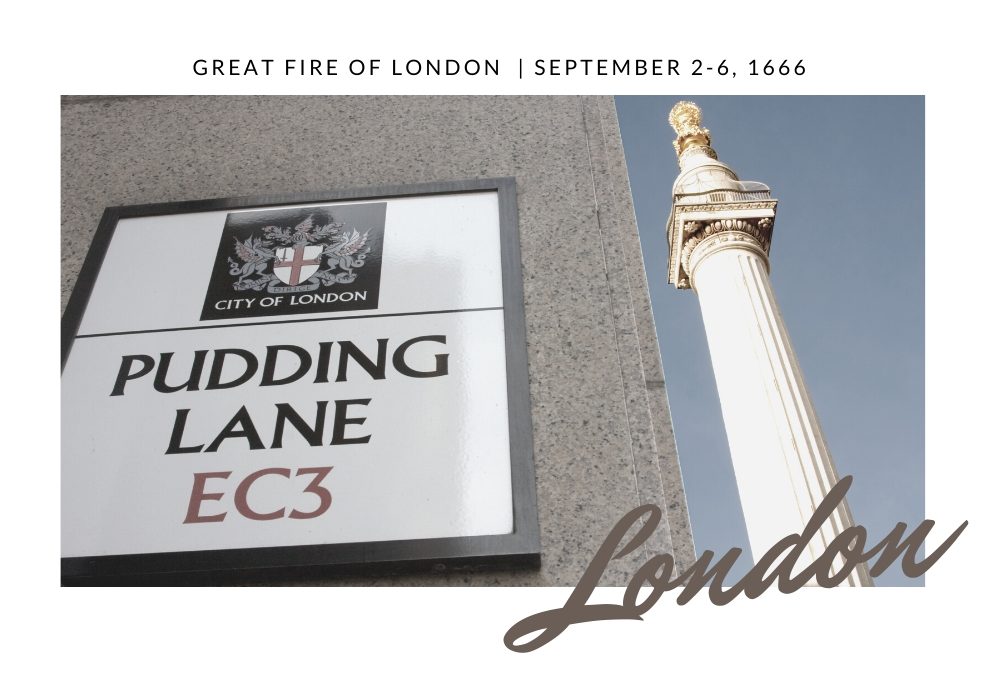 Where I live in England I am only 20 miles from Oxford, and 40 from London. I barely go to either. Both are teeming with tourists and are so incredibly busy that I just come home exhausted (I'm such a wimp). I love Oxford–it's a very old city and it's stunning, but there is something about London that is just plain exciting.

Some of my favorite parts of London – St Pauls Cathedral, The Tower of London, Tower Bridge, River Thames, MI6, Buckingham Palace… the old roads like Pudding Street (where the Great Fire of London started in 1666) where you can barely fit a car down them, and the impressive theater district, and Soho, and… the list is endless.

So I wanted to share some of my favorite parts of London, and probably the best place to start is way back in 1666.  London is ancient, it goes back much further, but it was a fire in a bakery in 1666 that burned the city to the ground so that they had to start again.

The Great Fire of London swept through the central parts of the English city from Sunday, 2 September to Thursday, 6 September 1666. The fire gutted the medieval City of London inside the old Roman city wall. The people of London had managed to survive the Great Plague in 1665.

“A fire started on September 2nd in the King’s bakery in Pudding Lane near London Bridge. Fires were quite a common occurrence in those days and were soon quelled. Indeed, when the Lord Mayor of London, Sir Thomas Bloodworth was woken up to be told about the fire, he replied “Pish! A woman might piss it out!”. However that summer had been very hot and there had been no rain for weeks, so consequently, the wooden houses and buildings were tinder dry.”

“Samuel Pepys and John Evelyn, the diarists, both gave dramatic, first-hand accounts of the next few days. Samuel Pepys, who was a clerk of the Privy Seal, hurried off to inform King Charles II.”

“In the immediate aftermath of the fire, a poor demented French watchmaker called (Lucky) Hubert, confessed to starting the fire deliberately: justice was swift and he was rapidly hanged. It was sometime later however that it was realized that he couldn’t have started it, as he was not in England at the time!” – RJ – this I find incredibly sad – poor guy!

I found this out as well – some buildings survived and one of them, The Olde Wine Shades Pub (Now a wine bar), built 1663 – “Once a favorite haunt of Charles Dickens, this historic pub was built in 1663 and even features an old smuggling tunnel leading down to the River Thames! Unfortunately, there is limited information on how it managed to escape the Great Fire, especially curious as the pub is located just a few streets away from Pudding Lane.” [https://www.historic-uk.com/HistoryMagazine/DestinationsUK/Survivors-of-the-Great-Fire-of-London]. Also, St Helen's Bishopsgate Church, built in the 12th century – The largest surviving church in the City of London, St Helen's was also the local parish church of William Shakespeare during his time in the area.

Oohhh, and this… The Old Curiosity Shop – built 1567 – “… featured in Charles Dickens‘ ‘The Old Curiosity Shop', this ancient building was actually located quite a few streets away from the Great Fire's limits but is included in our list due to its quaint facade and literary connection! …”

How cool is all that? I must put those on a list of places to see 🙂 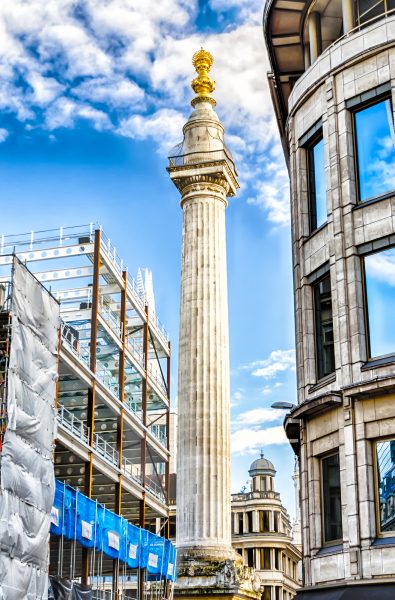 Monument to the Great Fire of London, UK 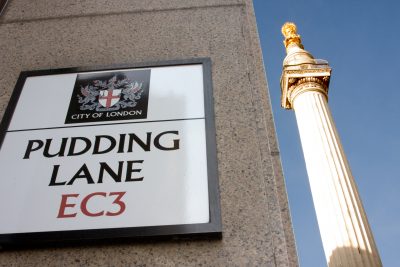 Monument to the Great Fire of London, UK and a sign for Pudding Lane