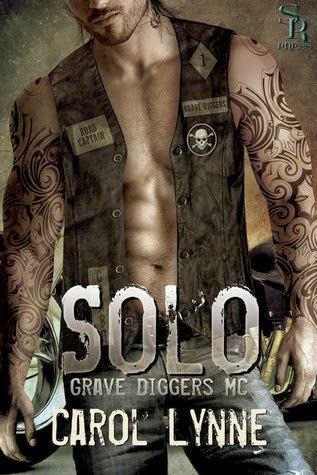 Sam“Solo” Braun lives by one truth, the Grave Diggers Motorcycle Club above all. The creed has served him well, giving him the only real family he’s ever known.He would die for his brothers and them for him, but they don’t know he prefers men over women. Coming out to a group of men who fear no one isn’t high on Solo’s priority list, especially because he’s never indulged in more than one night stands.

Everything changes after one night with Eric James. For the first time, Solo can’t stop thinking about a single night he’d spent with a man. When fate intervenes, Solo comes face to face with his blue-eyed obsession only to find out Eric is a cop. Solo hates cops, and so do his brothers in the club. However, Solo decides to gamble everything and spend more time with Eric under the guise of getting information.

Falling in love with a cop is a very dangerous proposition for a man in Solo’s position, so why can’t he walk away?

This is the first book in my new recommended category of Guilty Pleasures. You know… the kind of books you snuggle down with where the sexy characters are hot and the story is exactly how you want it to be.

Carol Lynne is my guilty pleasure and has been for many years and this book is no different. I loved Solo, but I loved Blue even more. Solo was hot, but Blue just won me over with his general yumminess. This is a lovely sexy romance with a happy ever after, and for the first book in a series it did an awesome job of beginning to world build. Also, stunning cover… licks torso…

Hopefully Rowdy's story is next.