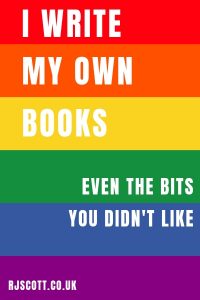 “People paying other people to write words for them? Then claiming the words as their own? Wait? Is that really a thing?”

And the old argument – “Ghostwriting is an old profession that doesn’t hurt anyone.”

And… this one I love “I’m not a plagiarist. I just put my name on other people’s work.”

First off, did people really not know that a vast majority of authors at the top of the charts in romance are people who have re-branded ghostwritten romance? Look at the MM charts… you can tell who they are. Hell, join one particular FB group I know of, and you can see the core of people you know in the MM genre admitting they ghostwrite for others.

We’ve had MF authors redoing their books by changing pronouns. Authors with six different pen names, claiming to be brothers, or friends, talking to themselves as each character on Facebook. Ghostwriting supports that shit, and no, in the romance genre specifically buying in GHOSTWRITTEN MATERIAL IS NOT ETHICAL. Someone who buys ghostwritten books, then rebrands them, creates fake personas on FB etc… they are not writers, they are not authors, they are MARKETING MACHINES and that is all.

Yesterday I wrote 3,700 words in the space of two and a half hours on Owatonna 3, Benoit, which is a co-authored book with Vicki. The words fell out of me, and I couldn’t get my characters into word fast enough and I felt like a writing Goddess and that I had the creative world under my control. To get words down like that is the best kind of natural high. I feel successful, happy, and so damn proud of myself for every single word. Every. Single. Word. I AM AN AUTHOR, and I ROCK… YAY RJ!

Other times I bleed and cry and wail like a banshee for those words I write. What Lies Beneath (Lancaster Falls 1) had me rewriting and cutting twenty thousand of the little fuckers, before I was truly happy with character. Some days on this book managed 600 words, other days I refused to sit at my Mac to even write, rocking in a corner with my dog, and I WAS the worst writer in the world. I was done, I couldn’t write anymore, I should get a job and give up. I wasn’t a goddess and the lows that hit me coming right on top of the Christmas frenzy had me carrying around the black dog of depression for weeks. Until a shining moment when the book made sense to me, and then, the words fell out of me and once again I was invincible.

When you read either of those books, or indeed any of my solo or co-written books, one thing you’ll know is that every word I write is all me. Every kiss, touch, sigh, family member, pet, wedding, gun fight… it's all me. My heart has gone into every single one.

And for this reason only, I can say one thing, categorically.

For the original information on the serial plagiarizer whose defense is that *the ghostwriter did it* start here: https://twitter.com/courtneymilan/status/1097699107827789825