My guest for Feature Friday this week is the wonderful Elin Gregory, here to talk about the pitfalls of writing historicals, welcome Elin…

One of the great joys, and great hazards, of writing historical fiction is the amount of research that needs to be done. There are very few people who are so steeped in the culture, primary sources and archaeological records of their chosen period that they don't need to fact check. Mary Beard is probably a safe bet for Roman stuff but I bet even she has to refresh her memory from time to time. And I'm just a museum worker with about enough knowledge of the 3000 years or so of the history our collection comprises to give out handy little soundbites, entertaining but not too heavy. When I embark on a new project it means some serious reading and note taking.

I do know writers who use their overall impression of the period to write their first draft and then check the fine detail to flesh out the second draft but you can get badly caught out by that. Part of the plot of Eleventh Hour, set in London in 1928, rests upon a chance encounter on a trolley bus. I adored them when I was a child – the ting of the bell, the showers of sparks as the boom that carried the electrical current bounced across from wire to wire – and my mother, born in 1925 was certain that they predated her.

I checked, of course, even found an image of trolley bus designs dated 1928 – I thought. But once the book had been released into the wild, so to speak, I was looking up something else and discovered that the ‘1928' referred to the model number and the **&^% things hadn't gone actually gone into service till 1929 – about 3 months too late! If only I'd used the word “tram”, dammit! Internet searches and asking ones mum are all fine and dandy but sometimes you need books – expensive glossy specialist books.

There's nothing quite as satisfying as going book shopping with the knowledge that, if necessary [and assuming you get any royalties] you can write the shopping spree off against tax. Books tend to go into subjects in more depth and also are peer reviewed, which can get absolutely vicious. They may vary in interpretation of the facts but the facts and supporting material are usually kosher. But even so there are times when you come across things for which there's really no excuse.

Some years ago I decided to take another swipe at a long project based on Y Gododdin, a 9th century Welsh poem describing a series of battles in Dark Ages Northumberland and Yorkshire. Amongst the Dark Ages history titles I picked up was The Holy Kingdom by Adrian Gilbert. This was published by Bantam books – a subsidiary of Transworld publishers so not a hole in the corner outfit. I was leafing through the photos in the middle and well… 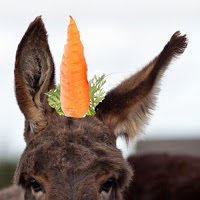 You know that feeling you get when someone tries to tell you you’re looking at a unicorn but somehow you can't quite believe it?

Well it’s worse when you’re looking at a painting you know very well, by an artist you admire and the painting is completely uncredited! This is art piracy and a Really Bad Thing!

This is the picture, though in the book it is cropped to the left and has no attribution. 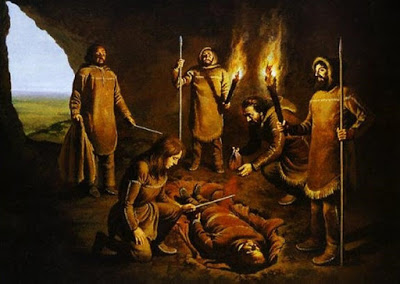 It was painted by Ron Embleton – beloved to people of my generation for his illustrations in Look and Learn, the end titles for the Captain Scarlet cartoon series, and his raunchy cartoon strip Wicked Wanda – but he was also very well known as a historical illustrator. The painting was commissioned by the National Museum of Wales and shows an upper Paleolithic interment on the Gower coastline, wrongly described as the Red Lady of Paviland [it’s a bloke]. At approximately 33,000 years old it is the oldest ritual burial to be found in Western Europe. The body was covered with a thick coating of red ochre, possibly as a deterrent to scavengers. In the Holy Kingdom the image is described as being a depiction of the burial of King Arthur and there's so much wrong with that I just don't know where to start!

Art piracy is as egregious as book piracy. Five minutes with Google reverse image search can usually give you an attribution that, even if it's not 100% correct at least makes it look like you've TRIED! But far worse than that, Holy Kingdom was advertised as a work of reference and now there is a whole bunch of would be Arthurian scholars who probably think that Arthur fought the Saxons dressed in a parka and mukluks.

So books – yeah, but they have to be the RIGHT books.

All of which is trying to say – I suppose – that authors of historical works do their best to get things right with the resources at their disposal but sometimes we just get it wrong. If I do another edition of Eleventh Hour, it'll say ‘tram' dammit!

Elin Gregory lives in South Wales and has been making stuff up since she learned to talk. Writing has always had to take second place to work and family but, slowly, she is finishing the many novels on her hard drive and actually trying to do something useful with them.

Historical subjects predominate. She has written about ancient Greek sculptors, 18th century seafarers but also about modern men who change shape at will and how echoes of the past can be heard in the present. Heroes tend to be hard as nails but capable of tenderness when circumstances allow.

There are always new works on the go and she is currently writing more 1930s spies, adding to a series of contemporary romances and doing background reading for stories set in Roman Britain and in WW2. 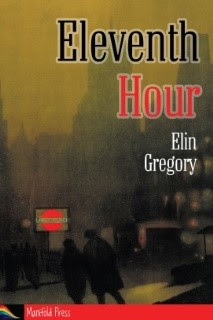 Borrowed from the Secret Intelligence Service cipher department to assist Briers Allerdale – a field agent returning to 1920s London with news of a dangerous anarchist plot – Miles Siward moves into a ‘couples only’ boarding house, posing as Allerdale’s ‘wife’. Miles relishes the opportunity to allow his alter ego, Millie, to spread her wings but if Miles wants the other agent’s respect he can never betray how much he enjoys being Millie nor how attractive he finds Allerdale.

Pursuing a ruthless enemy who wants to throw Europe back into the horrors of the Great War, Briers and Miles are helped and hindered by nosy landladies, Water Board officials, suave gentlemen representing foreign powers and their own increasing attraction to each other.

Will they catch their quarry? Will they find love? Could they hope for both?

The clock is ticking.


Malcolm Bright, brand new museum curator in a small Welsh Border town, is a little lonely until – acting as emergency archaeological consultant on a new housing development – he crosses the path of Rob Escley, aka Dirty Rob, who makes Mal’s earth move in more ways than one.

Then Rob discovers something wonderful, and together they must combat greedy developers and a treasure hunter determined to get his hands on the find. Are desperate measures justified to save the bones of our fathers? Will Dirty Rob live up to his reputation? Do museum curators really do it meticulously?

Answers must be found for the sake of Mal’s future, his happiness and his heart.