Welcome to Charlie Cochrane, today's guest for Feature Friday, Charlie is here to talk about writing a mystery novel, take it away Charlie…

How do you create suspense in your stories?

There are all the well-known techniquey things to draw on – shorter sentences, fast paced action, cutting down on description etc – but I think in the end it comes down to good plotting and good writing. I've just read two of the British Library series of classic mysteries and you couldn't have had two better examples of what to do and what not. One of them was so slow, even in the supposedly tense bits, because the author had the habit of never saying something once when he could say it four times. The other was really gripping, with a great climax where the reader was allowed to get into the head of the person-you-thought-was-the-killer-but-actually-wasn't and depicting their emotions and muddled thoughts.

Do you start with the crime/mystery then work the story around it or do you wing it?

Wing it, wing it, wing it. You see, when I write a mystery it's like I'm watching the story unfold on the television or hearing it on the radio. In half hour instalments, maybe, each of which corresponds to a chapter or two. I see the body being found, the characters being introduced, the clues lining up, and as I follow all of this I start to wonder who might have done it. This may sound totally ludicrous, but it works for me.

What are the ethics of writing historical figures?

In my humble opinion (as they say), I believe you have to make them act in line with what is known of their character. I know in historical fiction any and everyone is seen as fair game, so you can have the fictional Horatio Hornblower rubbing shoulders with real life admirals like Pellew or Nelson, which is fine so long as they do what the real Pellew and Nelson would have done. However, particularly in fanfiction, I've seen both of these gents acting in a way that would be called libellous if it were written about a living person. Frankly, it can be insulting. (Ooh, I got all cross there.)

In fiction anything is fair game, do you like finding obscure ways of bumping people off?

In a word, no. I'm not a writer whose mysteries focus on clever methods of despatch or highly complicated denouements. I'm more interested in the why someone was killed than the how, so my victims tend to be bludgeoned or poisoned or something straightforward, leaving the reader's mind uncluttered so they can concentrate on the characters and their motivations.

Have you ever had to go back and *hide the keys*? (stealing cues from Bill & Ted)

To my shame, I confess I had to look up that reference. If you mean do I have to go back through the manuscript when writing to plant clues/red herrings, then yes, I do sometimes, but it's a risky business. If you don't have a light touch and a sure hand, it can scream “Look! Look! Clue!” Funny thing is that usually the references I need are in the story already, so when I go back for a first review I'm amazed at how things hang together. Like my sub-conscious has been far more effective than I have at subtly seeding the story with what I'd need.

What part of the process do you find the hardest?

Writing sex scenes. Which is why it's great writing the Lindenshaw series and the recent Cambridge Fellows novellas, all of which are fade to black.

Because Charlie Cochrane couldn't be trusted to do any of her jobs of choice—like managing a rugby team—she writes. Her mystery novels include the Edwardian era Cambridge Fellows series, and the contemporary Lindenshaw Mysteries. Multi-published, she has titles with Carina, Riptide, Endeavour and Bold Strokes, among others.

A member of the Romantic Novelists’ Association, Mystery People and International Thriller Writers Inc, Charlie regularly appears at literary festivals and at reader and author conferences with The Deadly Dames. 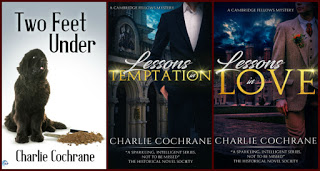