CHAPTER 1:
SAMMY AND THE BAD MAN

Sammy cowered under the bed in the guest room and covered his ears with his paws. His body shook with stress. He hated it when the Bad Man yelled. Sammy had never liked loud noises, but the Bad Man's shouting was the worst loud noise of all.

“I swear to God, if you don't shut your damn mouth—”

Because Sammy was supposed to make it stop. That was his job, to protect Mom Marie. But he was too afraid. Sammy trembled. His insides churned with fear, worry, and deep-down doggie guilt.

When the Bad Man was angry, his breath smelled sharp and his face got so ugly. He was hurting Mom Marie with his bad words and probably also with push, strike, pinch.


Mom Marie was Mom Charlotte's sister. She'd taken Sammy in after Mom Charlotte died. Sammy didn't love Mom Marie as much as he'd loved Charlotte. When he met Mom Charlotte, he was just a little pup, and he'd loved her with his whole heart and being and soul and stomach and everything. But Mom Marie was a nice human. She stroked his fur and gave him good things to eat. She talked sweet to him. It was Sammy's job to take care of Mom Marie now that he lived with her. But the first time he tried to stand between her and the Bad Man, the Bad Man had yelled and struck Sammy again and again with a big metal tool he'd grabbed from the counter. It hurt. A lot. Sammy's insides had hurt for days. It had hurt to breathe. It had hurt to pee. But the Bad Man's hate hurt the worst of all. Sammy didn't know why the Bad Man hated him so much, but he was the strongest in the pack, so he could do whatever he liked.

Now Sammy was overcome with fear whenever the Bad Man got close. He no longer tried to protect Mom Marie. Instead, Sammy hid under the bed and cowered. He felt shame for his fear and his failure. He was not a good dog at all. He hadn't saved Mom Charlotte the day she'd fallen down the stairs. He'd stood at the bottom of the stairs and watched, not understanding what was happening until it was too late.

Could he have saved her? What if he had leaped forward and let her land on his soft body? He should have tried. If only he had tried!

And now he couldn't save Mom Marie either. He was useless.

“I saw you! You flashed your leg to that guy.”

“I did not, Hank! You just make this stuff up in your head.”

Sammy shut his eyes. To calm himself, he went somewhere else in his mind. He thought about Mom Charlotte, of her soft gray hair, her twinkling eyes, and the love in her smile. He thought of the way she hugged him on the couch at night while she watched TV, about their long walks together. He loved it when she took him to the mountains to hike. His favorite thing, though, was the comforting weight of her against his back as Sammy snuggled up next to her in bed. That lovely, comfy bed! If only—

“There you are, you stupid dog!”

Sammy's eyes flew open. The Bad Man's face was hard and twisted as he looked under the bed. His beard was full and bristly, his eyes small and mean. He reached in and grabbed Sammy's collar, dragging him out. The collar choked Sammy and the dragging was so swift, one of his back legs got tangled. Sammy yelped.

As soon as he was out, he tried to get to his feet and run, but the man held his collar fast.

“Outside! Outside now!” He dragged Sammy toward the kitchen.

Sammy yelped again. He was in trouble. It was going to hurt.

“Hank, leave him alone, please!” Mom Marie's eyes were red, and Sammy sensed the bad feelings pouring off her.

“You want to be a bitch to me? Then your precious dog is not welcome in my house!”

The Bad Man opened the back door and dragged Sammy into the yard.

Mommy. Mommy. Help me, Sammy thought, picturing Mom Charlotte. But she was gone and couldn't help him now.

It had snowed all day and the ground was covered with a heavy pelt of the white, cold stuff. It stuck to Sammy's fur as he was dragged through on his four paws.

The Bad Man snapped Sammy's collar to a chain on a tree. He often put Sammy out in the yard on the chain. Sammy loved the outside. He loved the soft, fragrant grass and the way the tall trees softened the sun. He loved trying to bite the wind. He loved watching birds and spiders and all sorts of wild things. He even loved the snow when it came down in thick, fluffy pads. But he loathed the chain. The chain pinned him in place and it was so boring. It was bad enough when the day was warm and gentle. But in the cold…

No, please. I'm sorry. I will stay under the bed. I promise. You won't even see me. Just please don't leave me here!

Mom Marie pleaded, but the Bad Man shoved her inside and shut the door.

He shook all over, both from the cold outside and from a deeper cold inside. He wished to be back home with Mom Charlotte where every day was fun and safe and he was so so loved. He hadn't known then how lucky he was. He hadn't known then that life could be scary. And lonely. And sad. But worse of all was the guilt, the way his doggy heart beat with longing to help those he loved—in vain. He couldn't help anyone. He was a coward.

When it was clear no one was going to come out to let Sammy back into the house, he dug a hole in the snow with his paws, making a place to lie down. The chain didn't stretch far enough to let him crawl under the porch or huddle next the fence. At least here under the tree, the snow was less deep. He lay in the spot he'd made and tried to sleep, but he was too cold. When he couldn't stand it anymore, he got up and ran around the tree, around and around, first one way and then the other to unwrap the chain. When he got tired of that, he would lay back down again.

Inside him, in the space where his grief and guilt over Mom Charlotte lived, he still felt love, love, love. Love for Mom Charlotte, for Mom Marie, for the world. It was a love that was pure, and it shone hot despite everything. That stew of emotions created waves and currents, highs and lows, chemicals that washed through every cell of his body.

Sammy was getting smarter.

He could sense that he understood more and more of what the Bad Man and Mom Marie said, both the words and the meaning behind the words. Sammy's view was shifting, but he didn't know what to do with these new thoughts and feelings.

Get away, a calm voice in his head said. Run away. The next chance you get, watch for it and run. It isn't safe here. You can't stay.

But Mom Marie would be alone and in danger.

You can't help her. He's too strong. Run away. She wants you to. She hates it when Hank hurts you. Mom Charlotte would want you to run away too.

But even if Sammy could leave Mom Marie, where could he go? What would he do? Who would feed him? And how would he live being outside all the time when he hated being outside in the snow right now?

It was hopeless. Helplessness mixed with the stew of emotions down deep in his core. He lay on the frozen ground, or he paced. He thought. The cold grew worse, his body wracked with shivers. The night was endless.

But no one ever came. 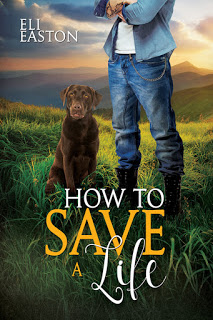 Rav Miller looked into the terrified, intelligent eyes of the chocolate Labrador on death row, and knew he’d do anything to save him. When the dog, Sammy, escapes and heads to Mad Creek, Rav follows. Mad Creek. The town had become legendary in Rav’s mind after he’d met that bizarre group last year. Rav dismissed his crazy suspicions back then, but when he arrives in Mad Creek, he knows it’s true. Dog shifters exist, and apparently they all live in the California mountains. It’s enough to blow a bad boy’s mind.

Sammy has something in common with Rav—neither one of them trusts people. After Sammy’s abuse as a dog, he particularly dislikes tough-looking men like Rav. But when Sammy gets a chance to work with rescued dogs at the new Mad Creek shelter, his deep compulsion to help others overcomes his fear. Rav and Sammy bond over saving strays. If they can each find the courage to let someone else in, they might find their way to love.

Sheriff Lance Beaufort doesn’t like humans moving into Mad Creek, especially not the tattooed and defiant Rav. When Rav starts a rescue shelter, the town thinks he’s wonderful! But Lance isn’t fooled. He doesn’t buy Rav’s innocent act for one second. How much does Rav know about the quickened? What is his game? And why did he have to show up now, when Lance and the other town leaders are overwhelmed by all the new quickened pouring in?

Rav knows how to save a life. But can he save an entire town? Can he rescue Mad Creek?

Eli Easton has been at various times and under different names a minister’s daughter, a computer programmer, a game designer, the author of paranormal mysteries, a fan fiction writer, an organic farmer, and a long-distance walker. She began writing m/m romance in 2013 and has published 27 books since then. She hopes to write many more.

As an avid reader of such, she is tickled pink when an author manages to combine literary merit, vast stores of humor, melting hotness, and eye-dabbing sweetness into one story. She promises to strive to achieve most of that most of the time. She currently lives on a farm in Pennsylvania with her husband, two bulldogs, several cows, and a cat. All of them (except for the husband) are female, hence explaining the naked men that have taken up residence in her latest fiction writing.