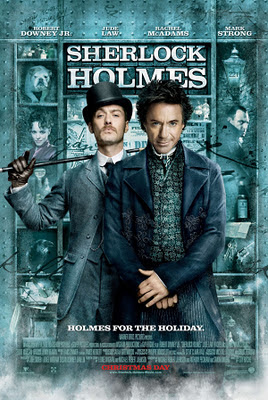 Sherlock Holmes: A Game of Shadows

Holmes and Watson do what they do best. A loud quick and incredibly clever film.


See the film entry on IMDB

The short answer to whether Downey does a Depp  is no…

Take the pirate films for instance… I may be the only one but I actually gave up on Pirates#4 because the first almost hour was *look at me I am Johnny Depp dressed as Jack Sparrow and this film is about me and aren't I funny*.

I loved Pirates #1, I love me some Johnny Depp, but gah, when an entire introduction to a film is him repeating stuff we have already seen with boring cameos I really lost interest.

I worried about this as I sat in the first half hour of the Sherlock Holmes movie as well…let me explain.

RDJ has a career I have followed from day one and he was in my opinion perfectly cast as Iron Man and as Holmes. And as for Jude Law, infidelities and nanny's to one side, he is soooo pretty. Yes I am biased!

I was SO excited about seeing Holmes#2 (perhaps a little overexcited) and with babysitter in place we went off for our regular Noodle Bar / Cinema nights out. I couldn't eat my chicken and rice fast enough, bought my sour face chews and a ticket.

Then the first half an hour happened.

It was like put together all the clever stuff Holmes could do, add in the slow motion fighting thoughts and that seems to be the first half hour. Suddenly, with a horror that cut me deep, I was *gasps* bored… I even had the treachorous thought that I am not going to like this film. AT ALL…. Watson off getting married, Holmes being really odd in a forest in his room, the burlesque type stag night with the cliché bad guys… GAH…

And then it happened. Magic. And magic started on the train. The boys back together, Law and Downey are perfect together. Add in big guns and clever lines and I was hooked! Guy Ritchie you are a sly old dog…

The sets are beautiful. I mean not just beautiful, but perfect. Old London captured in all it's chaotic ethnic clash of beauty and dirt and rich and poor. Stunning. I don't care if it isn't historically correct but even down to the guys digging a *London Underground* tunnel and the use of a car was just so damn clever.