This story catches up with Stephen and Alex from Instant Gratification, a few months after the end of that title.

I hadn’t exactly shouted the words, but they’d cut through the air in our corner of the club very clearly. Everyone in our group turned to gawp at me. Kev, James, and all my other friends did good impressions of gold-fish. Only one man standing around the bar height table didn’t look as shocked as hell.

Maybe Stephen looked slightly surprised, but his expression was more assessing than anything else. Assessing, and concerned, and very ready to jump in and rescue me if necessary.

Okay, I get it. You’re my boyfriend not my personal servant. I’m sorry, I’ll stop being so bossy. Perhaps it wouldn’t be those exact words, but as I met Stephen’s eyes, I knew that if he saw the slightest bit of uncertainty in me, he wouldn’t hesitate to pretend that the honorific he loved was a joke at his expense. Hell, he’d probably pull it off, too. It wouldn’t take much to convince my friends that it was the truth.

I held Stephen’s gaze as the seconds ticked passed, making sure he knew that my using the word sir toward him in front of all my friends for the first time wasn’t a mistake. It wasn’t a slip of the tongue, it was a conscious decision.

His expression changed slightly as he realised that I knew what I was doing.

“Since when do you call Stephen ‘sir’?” Kev asked from somewhere off to my right.

“Since we first started dating,” I said, still not breaking eye contact with Stephen.

God help me, but I could see it in his eyes, he was still prepared to step in any time and play it off as a joke if necessary.

“Yes.” It was a huge relief to finally say it in front of them.

“What happened to baby-doms don’t know what they’re doing?” someone else in the group asked.

“And not subbing to anyone within a decade of your own age?” another voice chipped in.

“Didn’t you say before that…”

My friends’ voices floated around me, repeating back all the things I’d said about younger would-be doms over the last few years. Apparently, they hadn’t noticed that I’d stopped saying them a few months ago, at exactly the same the time as Stephen and I started dating.

Failure to keep repeating the same statements was obviously a lot easier to overlook than my actions completely contradicting them.

I made myself look away from Stephen and met the gaze of each of my friends in turn. “I was wrong.”

Kev looked as amused as hell and I had no doubt he’d be roasting me for months about falling for a dom who was even younger than me. I’d been too sure, too vocal, about thinking it was impossible for a young man to be a good dom, to get away with not being teased mercilessly about my change of heart. I was okay with that.

I saw similar expressions on the faces of the other subs in the group.

The next guy I turned to was a self-declared dom who was just a few years older than me.

“I was wrong when I said that it was impossible for a man my own age to know what he’s doing and be a good dom,” I cut in. “I wasn’t wrong when I said you don’t know what you’re doing, just about Stephen. There’s a difference.” There wasn’t a trace of submission in my voice when I spoke to him, no honorific.

I turned back to Stephen and there was a light in his eyes which I only usually saw in private.

As the guy I’d shot down moved to speak to another wanna-be dom I’d told I wasn’t interested in a few weeks before I met Stephen, and as other men stepped away from the table to share gossip, the group shifted and I found myself standing next to Stephen.

I glanced up at him, waiting for his final verdict. He didn’t say anything, just stroked my cheek with his knuckles.

To hell with it, I gave in and broke the silence first.

He frowned slightly. “I had no problem with you wanting to keep our kinks private. I didn’t mind waiting. You didn’t have to—”

“You might not need them to know I’m your sub, but I definitely wanted them to know that you’re my master. I didn’t want to wait any more. I like that they know now, sir, and I like being able to call you sir whenever I want to.”

For the first time all trace of concern left his eyes. He liked it too. It wasn’t exactly a surprise to me. I’d always known he’d love for everyone to know that he wasn’t just a vanilla boyfriend to me—for them to know exactly who I belonged to.

Consideration, patience, and a willingness to keep our kinks private if I wanted to, were all nice traits in a dom. Possessiveness was an even better one. And my master didn’t just like us going public, he loved it.

With that much success running through my veins, I couldn’t help but double down. “Of course that means there’s nothing stopping us doing anything in public…” I glanced across to the door leaning from the bar towards the public play rooms at the back of the club.

“Not tonight.” He didn’t even pause to think about it.

He put his half full glass down, took my almost empty glass out of my hand and set that aside too. Next thing I knew we were out in his car—not the Jag he sometimes managed to wrangle from work, just his normal ride.

I started to put my belt on, expecting Stephen to race us back to his place as quickly as possible, but he stopped me short and switched on the interior light instead.

He took a box out of his jacket pocket. It was less than an inch deep, and about four inches square. He offered it to me.

I had the lid off in less than a second. A necklace-long length of braided leather lay coiled against the padding inside the box. There was a silver clasp at each end. The air caught in my throat as I ran my fingers over it.

“The idea was to keep it subtle, so we’d be the only ones who knew it was definitely a collar rather than just jewellery,” Stephen said. “It’s—”

“No one will think it’s just jewellery now, Alex. Well, strangers will still think that, but none of your friends will.” Tucking a knuckle under my chin he made me tear my eyes away from the collar and look him in the eye. “They’ll all know you’re wearing a collar. My collar.”

As tempted as I was too look down and admire the collar again, I kept my eyes locked with his, letting him know I was just as certain about this as I had been about my announcement in the club.

It only took him seconds to fit the collar around my neck. The leather rested against the notch between my collarbones in the front. It would be easy to hide behind a shirt at work, but I had zero interest in hiding it from anyone. I wanted everyone to see it—to see that I belonged to my master—to see it now.

“Do you want to go back inside for a few minutes before we head home?” Stephen asked, an indulgent, amused note creeping in his voice. He knew how much I hated waiting for anything if I could avoid it.

There was only one answer to give, and from that moment on I could say it no matter who was in earshot. “Yes, sir!”

The End
For your chance to win any you choice of these titles Axel’s Pup, Duck!, Celebrate, Magpie, Base Over Apex, Worth Waiting For, Worth a Shot, Better than Sex, Instant Gratification, or an IOU for my next e-book release, leave a comment below. 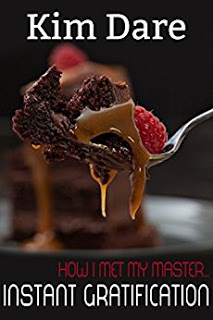 Frustration has never been one of Alex’s kinks. Neither has self-denial, or saying no to men he’d really like to have sex with. So, he’s not quite sure how he ended up in this mess.

The bet had sounded so simple when he first heard it. All he needs to do is say no to everything Stephen offers him for the next twelve hours. How hard could that possibly be? Despite the fact that Stephen is the kind of guy Alex would love to say yes to, for vanilla at least, Alex is confident he’s going to win the bet no trouble at all.

He remains confident, right up until the moment the bet begins and he finds himself in more trouble than he ever thought possible. Then, the only thing Alex is sure about is that twelve hours is an incredibly long time for a man to have to resist temptation, especially if that man has been used to instant gratification.

Please note: This story was previously published under the title Yes! and as part of the Friction Anthology. This version has been re-worked to become part of the How I Met My Master Collection, but it has not been significantly extended.

While she occasionally enjoys writing other pairings, most of Kim's stories focus on Male/Male relationships. But, no matter what the pairing, from paranormal to contemporary, and from the sweet to the intense, everything she writes will always feature three things – Kink, Love and a Happy Ending.