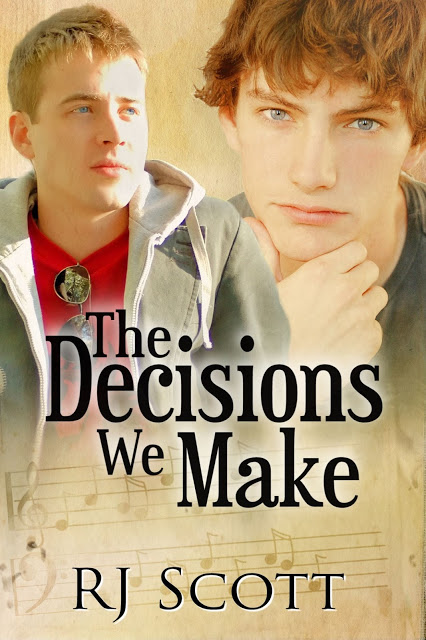 Daniel Keyes is an orphan, fostered by the Walker’s. The product of a lonely childhood, he is thrown into the chaos of the Walker family and into the life of his new foster brother Jamie.

This story is the journey of Daniel and Jamie finding their place in the world. Through Jamie being a victim of hate crime to coming out to family and friends, there are many decisions the boys have to make before they become men.

“….RJ Scott delivers the goods one more time in this quietly stunning beauty. She grabbed my attention on page one and my heart on page two. And never let either one go….”

“….If The Decisions We Make has done anything, it’s proven to me that RJ Scott has definitely found her place in the YA LGBT genre…”

Top 2 Bottom Reviews 4/5 – “….If The Decisions We Make has done anything, it’s proven to me
that RJ Scott has definitely found her place in the YA LGBT genre. All
the angst, agony, and emotion that make their way into her adult M/M
romances translate beautifully with her teenage characters as they
struggle to find a place to belong and build a path to happiness on the
often turbulent journey to adulthood….”

Rainbow Book Reviews – “….If you like angst-y stories, if the task of growing up in today's world
baffles you but you’re curious about the way kids deal with it, and if
you think you can survive one heck of an emotional roller coaster ride,
then give this book a chance. I don’t think you'll regret it – I
certainly didn’t!….”

A Bear on Books -“….RJ Scott delivers the goods one more time in this quietly stunning beauty.  She grabbed my attention on page one and my heart on page two.  And never let either one go….”

Hearts on Fire Review – 3.5/5 – “….At the end of the story, it left me with a satisfied feeling of Jamie and Daniel’s relationship. It was sweet and resolute. I liked RJ Scott’s writing and will read more from this author in the future….”

Blogger Girls – “”….I thoroughly enjoyed this sweet story of young adulthood and definitely recommned for those who like the sweetness of young discovery.

Overall Impression: I really liked it!….”

“Do you think he loves Star Wars or crappy Transformers like Mark?” Sue Walker looked down at her middle child and smiled at his question. His bright blue eyes shone with excitement, and he hopped from foot to foot. Jamie never actually sat still for anything longer than ten minutes in any one go. Not even when he played video games; he was constantly on the move in his seat.

Jamie was the most laid-back of her children. Nothing ever appeared to faze him. He was comfortable in his own skin—athletic, above average bright, and just a very happy open child. Sue had wanted more children after Megan, he youngest, but an emergency operation after her daughter was born meant no more children for her. That didn’t mean her heart had stopped wanting more though, and when Megan turned two, Jamie nine, and Mark thirteen, that was when she’d spoken to Don about fostering. He agreed immediately. They were financially secure, and Sue wasn’t alone in wanting a large family.

She and Don, her husband of twenty years, had sat all three kids down and explained they wanted to put themselves forward as a foster family. There was no sense in agreeing to care for a new child if her own family was hesitant. Sue was honest with them all, and one by one, her family told her it was a wonderful idea. She couldn’t have been prouder of a single one of them. Mark, her eldest, who asked if they could get a girl with boobs. Her middle boy, Jamie, who needed reassurance he wouldn’t have to share his room. Lastly, her youngest, Megan, who was just worried it would be yet another boy. All three were excited in different ways to add to their family.

So today, it was happening. Their first foster placement would be here soon, and his name was Daniel Keyes. The authorities had explained he was quiet, shy, and a gifted child, one who needed love and attention to make him blossom as a child. Sue had patience and love to spare. She was determined Daniel would be safe here.

“He's only four months younger than you, so I'm sure he will love Star Wars.” Wasn’t that what most nine year olds liked at the moment? It was certainly what Jamie loved.

Jamie took the news in stride, and she loved him for it. Feeling secure was never an issue for Jamie Alexander Walker.

“An' he's not staying forever?”

“No. Fostering means he will stay just as long as he needs to until a new family is found for him.”

“And I really don't have to share my room?”

“No. Dad is setting up a bed in the spare room.”

The wide grin that Jamie gave her was confirmation enough he was happy about that situation. She only hoped her other two were as easy to win over. Daniel, the boy they were going to be given, was an orphan. He’d lost his father to cancer and his mother to apparent suicide. He was going to be more than a little lost and lonely nine-year-old, and it would be Jamie's good nature that took the brunt of any emotional problems Daniel might have. Being the same age meant the same class at school and similar interests.

“So the only thing he'll use is the den?” Jamie looked up at her. The den was Jamie's domain, where Vader battled with Luke and Han flew to the rescue. Sue nodded and then dropped to her knees in front of Jamie. The den had been taken over by the arrival yesterday of a piano.

“Daniel plays a piano, and apparently, he is very good at playing it. It will be good for him to have something he can have here that is his.” She subsided into thought at the worry of just how damaged Daniel might be by everything he had seen in his short life.

“I'm really excited about him coming. Please don’t be sad,” Jamie offered gently. Sue realized her son had picked up on her sudden quiet mood, and she hugged him tight. He might be a bundle of excitable drama, but under it all, he really was the most sensitive of her kids.

“I'm fine, sweetie. Are you going to meet him at the door with me?”

“‘Kay, Mom. I'm going to check his room has make sure it has some more good stuff in it.”

Mark was away at football practice, and Megan was at a party for a friend. It was just her and Don and Jamie. Jamie was back at her side, peering out through the frosted glass of the front door. He couldn’t keep still and was again hopping from foot to foot with excitement.

“Calm down, sweetie; Daniel is kind of shy,” she warned him.

“Okay, Mom, I’ll try.” If Jamie had any faults, it was that he had an overabundance of confidence, enthusiasm, and general all round hyperactivity. They weren’t a family that could be labeled as quiet by any stretch of the imagination. They were a boisterous crowd, but social services said that would be good for Daniel, and when Sue was handed Daniel’s file, her heart just melted.

The car pulled up, and a short boy, dark hair flopping over his eyes, a bag clutched in long fingers, stepped out of the car and stood uncertainly, looking up at his new house. He spotted Sue, and a small smile crossed his face, then he turned, exchanging words with his companion, before nodding and holding onto her hand. He lowered his head as he neared the door, not lifting it even as Sue welcomed his placement officer and him in. He just scuffed his feet on the doormat.

“Hello, Daniel,” Sue said brightly. She noticing her son had stopped hopping from foot to foot and instead was staring at the new visitor. She could feel him visibly bristling with excitement but trying to keep it inside.

“Why don’t you let Jamie show you your room, Daniel?” Daniel lifted his gaze, his gray eyes filled with an expression of fear. Sue wanted to say something clever to dispel the young boy's fears, but Jamie interrupted in his usual take-no-prisoners fashion.

“Yeah, Daniel, come with me and see. We got like painted bits, and posters, and I didn’t know what you was bringin’, but I put like loadsa books in your room and some Star Wars stuff and some trading cards. I mean they're the ones I have two of, but you know you can always swap ’em if you already have ’em, and I’ve also got like this second controller for you to play with me. Come on. Quick.”

Jamie grabbed at Daniel’s arm, just reaching farther as Daniel backed away a bit startled at the touch, and giving him no chance to argue, Jamie dragged him up the stairs.