Guarding Morgan made the best sellers list on Audible *yay*. Something that completely slipped me by until an author friend of mine, Jay Northcote, pointed it out to me.

So far I have two audio books, Guarding Morgan, the first in the Sanctuary Series (with The Only Easy Day – book 2 – coming soon) and The Christmas Throwaway.

Both are narrated by the insanely talented Sean Crsiden.

The links for each are as follows:

Christmas is a time for giving – what do you do when no one gives a damn?

For Zachary Weston Christmas means sleeping on a churchyard bench in the freezing snow with nothing better in his future. Thrown out of his home for being gay, he is left without money or, it seems, anywhere to go. Until a stranger shows him that some people do give a lot more than a damn.

Ben Hamilton is a rookie cop in his small home town. He finds a young throwaway, fresh from the city, sleeping on a bench in the churchyard on a snowy Christmas Eve. Can he be the one to give Zachary his own Christmas miracle?

Morgan Drake witnesses a murder in an alleyway. He is the only person who can give evidence in prosecuting the cop responsible for the crime. When the FBI safe house where he’s being held is compromised, he follows the instructions of his agent in charge and runs.

Nik Valentinov works for Sanctuary, a foundation that offers witness protection when FBI security is questionable.

When Morgan's handler sends him to Nik for safety, neither Morgan nor Nik could imagine that two weeks alone in a cabin in the woods could start something more. Something way more than just trying to keep Morgan alive. Something that makes their heart race more than danger…… Love.

The Only Easy Day – Sanctuary Book 2 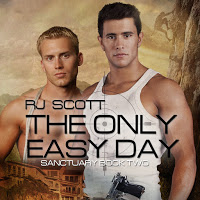