Two of my favourite things, Christmas and Hockey, so time to curl up on the sofa, stick on the Christmas mix and spend some time reading about those gorgeous hockey hunks and how they're going to be spending their season of goodwill! 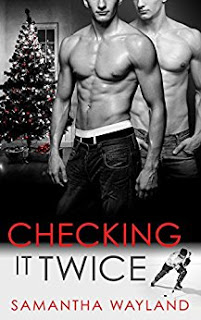 Mike & Alexei are back, and they’re hotter than ever.

After four years with Alexei, there are a few things Mike knows with absolute certainty: he loves Alexei, Alexei loves him, and Alexei gives the very best gifts. This Christmas is no exception, though Mike is having a hell of a time figuring out what, exactly, Alexei’s gift is.

Alexei knows his gift this year is going to blow Mike’s mind, but in the meantime, it’s pretty hilarious watching Mike try to figure out what it is. Granted, Alexei does have a lot of surprises in store for Mike this week, and it sure as hell isn’t frankincense and myrrh.

Sam lives with her family—of both the two and four-legged variety—outside of Boston. She used to spend her days toiling away in corporate nerdville but was recently sprung from that hell. Now when she’s not locked away in her home office, she can generally be found tucked in the corner of the local Thai place with a few beloved friends (and fellow authors).

Her favorite things include mango martinis, tiny Chihuahuas with big attitude problems, and the Oxford comma.

Sam loves to hear from readers. 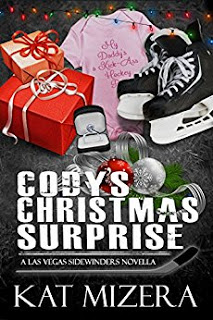 The magic of Christmas is in the air and Cody Armstrong has a big surprise for his wife of seven years. Surrounded by their friends and family, he’s hoping this will be a Christmas Eve she’ll never forget.

Suzanne Armstrong finally understands that her sweet, handsome husband didn’t just marry her because she was pregnant. This is their first Christmas as a real couple and she has a special surprise for him too.

When an old acquaintance shows up on their doorstep with a surprise of her own, it could be the end of the happily ever after they’ve waited so long to find. Cody will have to prove that Suze is the only woman he’s ever loved and she’ll have to search her heart to decide whether she can put her faith in him. Facing their biggest obstacle yet, will they come out the other side or will the past shatter any chance for them to have a future?

Note: This is a holiday novella that goes along with the Las Vegas Sidewinders series. It can be read as a stand-alone but is a supplement to the series that falls between the first two books. 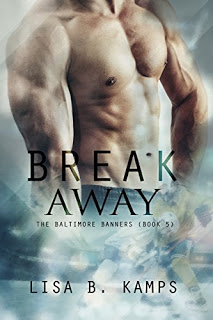 Jean-Pierre “JP” Larocque is a speed demon for the Baltimore Banners. He lives for speed off the ice, too, playing fast and loose with cars and women. But is he really a player, or is his carefree exterior nothing more than a show, hiding a lonely man filled with regret as he struggles to forget the only woman who mattered?

Emily Poole thought she knew what she wanted in life, but everything changed five years ago. Now she exists day by day, helping care for her niece after her sister’s bitter divorce. It may not be how she envisioned her life, but she's happy. Or so she thinks, until JP re-enters her life. Now she realizes there’s a lot more she wants, including a second chance with JP.

Can these two lost souls finally find forgiveness and Break Away to the future? Or will the shared tragedy of their past tear them apart for good this time?

Lisa B. Kamps is the author of the best-selling series The Baltimore Banners, featuring “hard-hitting, heart-melting hockey players” (USA Today), on and off the ice. Her newest series, Firehouse Fourteen, features hot and heroic firefighters and launched with ONCE BURNED.

Lisa grew up with an overactive imagination, strong encouragement from her parents, an insatiable infatuation with the Peanuts gang–and the constant companion of stories in her head. Writing those stories down just seemed natural and a new love was born at the ripe old age of five!

That love of writing continued to grow, along with all those voices in her head, even during her assorted careers: first as a firefighter with the Baltimore County Fire Department, then a very brief (and not very successful) stint at bartending in east Baltimore, and finally as the Director of Retail Operations for a busy Civil War non-profit.

Lisa currently lives in Maryland with her husband and two sons (who are mostly sorta-kinda moved out!), one very spoiled Border Collie, two cats with major attitude, several head of cattle, and entirely too many chickens to count.