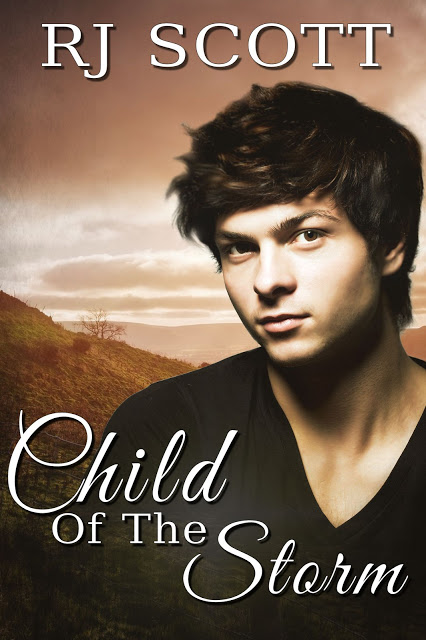 Child Of The Storm

A 11,500 word story, which originally appeared in the Hearts Of England Anthology.

Ben Hyland is excited to be showing Yorkshire to Cory Vasilyev. Cory scouts locations for film studios and needs the right inspiration for a new film version of Wuthering Heights. Problem is, Ben wants to share his passion for the story and for the wild moors but Cory just wants to go home.

Until abruptly Cory doesn't want to leave at all. 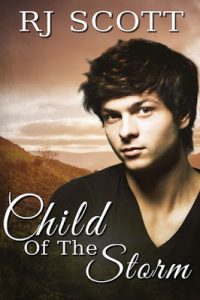 Mrs Condit & Friends Read Books – 4/5 – “….Well written, solid characters, solid plot, but I will warn you, it will leave you wanting more. So R.J. Scott…are we getting more?…”

He had saved room in his case by not packing anything to sleep in. Boxers would do fine and after stripping the rest of his clothes, he climbed under the heavy quilt. It was only as he lay down that he realized he had left the light on. With a sigh, he climbed back out, but as he reached for the light switch, there was a knock on his door. He peered into the softly lit hallway to see a concerned, grumpy Cory in a T-shirt with his legs bare.

“It’s probably something really simple but I can’t figure out the TV, could you just… you know…”

Ben looked down at his boxers and bare chest and then up. Being half-naked wasn’t normally an issue and Cory’s intense gaze was focused most definitely above Ben’s neck. Still, a small frisson of excitement insinuated itself into Ben’s thoughts. Was the request nothing more than an excuse to get him into Cory’s room? Glancing up and down the empty hall, he checked for anyone who would be offended by a man in his underwear and then with a bold grin he grabbed his key card and shut his door behind him.

Cory’s room was very similar to his although the bed was a lighter wood and Cory’s bag sat in the middle of it still full of clothes. Maybe he wasn’t unpacking given the whole only-a-few-days thing.

“I tried to get it to turn on but I couldn’t.” Cory sounded frustrated and he slumped down on to the bed. Ben was not looking at the edge of underwear he could see under the T-shirt nor the adorably grumpy face that was probably inwardly cursing all things English.

Ben leaned over the TV and followed the lead to the socket where the plug was pushed in. The whole thing was turned off at the wall. After flicking the switch the theme tune to EastEnders filled the room and he dove quickly for the control to dim the sound. Well that was an easy fix and needed none of his expertise at coaxing old TVs to work. Didn’t American TV plugs need to be turned on at the wall?

“There. It was just not switched on at the wall,” Ben explained. He turned to face Cory and almost swallowed his tongue. Cory had decided to remove his T-shirt, revealing acres of toned, tanned skin with a soft furring of chest hair and a treasure trail that led to all kinds of imaginable sin. Coughing to cover his embarrassment and hoping to hell he could leave before his erection joined them in the room, he handed the control over to Cory. Cory was clearly having nothing of Ben’s escape and instead launched into talking.

“Sorry if I was a bit short with you in the car. I have an ex who is an asshole and I haven’t stopped the last few weeks. I think it’s caught up with me.” Yawning behind his other hand, he stretched.

“No worries,” Ben said. A stretching, sleepy, mostly naked guy was sending heat to his groin quicker than a Roger Bannister mile. Quickly he headed for the door and expected a thank you and a goodnight. Instead he got something very different. Questions.

“What is this EastEnders about? I’ve seen it sometimes on BBC America, some kind of soap opera? Or is it one those real-life fly-on-the-wall things?”

“It’s a soap set in London—kind of famous here.”

“I like it. Maybe if I watch it I will learn something about living in London,” Cory said finally. Ben realized he still stood in boxers in front of his employer with a semi-erect dick. He could feel the blush rising from his toes.

Cory slithered up the bed in small sinuous movements, the pull of the sheets on his jockeys revealing more toned skin. “Thank you, Ben. Goodnight.”

Ben opened the door and looked back at Cory who had leaned back on a selection of puffed up pillows and kept his eyes fixated to the screen. One of his hands had come to rest on his stomach and was splayed invitingly with the small finger pointing the way to heaven. Ben groaned to himself at the view and then shut the door. Back in his room and under the quilt he thought he had never really seen anything as oddly erotic and yet cute as a half-naked Cory Vasilyev watching a soap opera. Endearing and cute wasn’t supposed to make you hard. Cute was just that—sweet. It wasn’t sexy or hot or anything guaranteed to give Ben a hard-on. Clearly his dick was focusing on the eroticism of that splayed hand on bare skin.

Share on PinterestShare on TwitterShare on FacebookShare on Email
Child Of The Storm, England, Short Story
Share :

Max and The Prince – Bodyguards Inc. #3