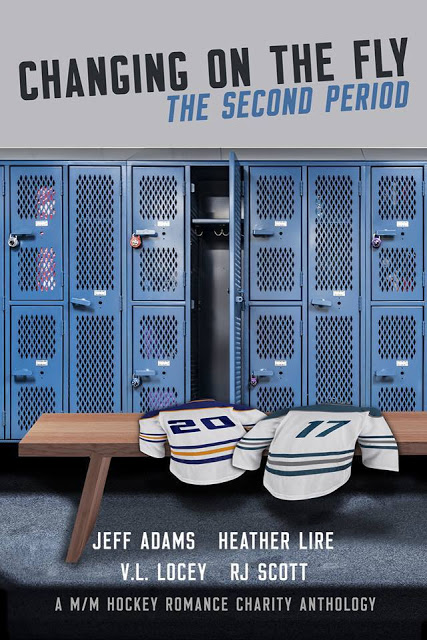 Changing On The Fly: The Second Period – Various Authors

by RJ Scott
61 views
No Comments
0

Changing on the Fly is a celebration of romance, featuring four M/M stories about hockey players falling in love on – and off – the ice. All proceeds from the anthology will be donated to a charity that supports inclusiveness in athletics.The anthology will be available starting in October 4, 2017, for a limited time only.It includes the following stories:

Head in the Game by Jeff Adams
Second Chance at Love by Heather Lire
Rookie Moves by V.L. Locey
Secrets by Rj Scott 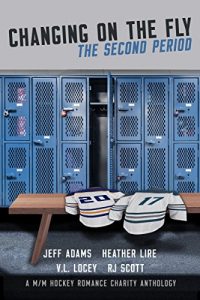 Jeff Adams’ – Head in the Game
After a disastrous breakup, pro hockey defenseman Roger Jacobson’s game is slipping. With his contract up for renewal he has to do something quick because his fourteen-year career is on the line. Roger returns to his hometown to work with his old coach, while helping run the summer hockey camp. But Dylan Baker, a handsome graduate student and the coach’s son, proves to be a romantic distraction that Roger couldn’t have anticipated.Can Roger’s trip home fix his game and mend his broken heart?

Heather Lire’s Second Chance at LoveGrowing up in Holiday, Vermont Zach and Tony were best friends. After high school, they drifted apart as their lives and careers took them in different directions. When they run into each other on vacation they fall back into the easy friendship they’d had as kids.
The one thing they didn’t expect was the sexual tension between them. As they explore these new feelings for each other they discover that sometimes the last person they expected fall for is their Second Chance at Love.

It’s been three months since New York Nightwings superstar center and captain, Riley Zeally, came out. The glare of the media has been incredibly bright but Riley’s used to dealing with the spotlight. His boyfriend, Keiffer, isn’t. The intense scrutiny of being at the side of such a huge sports star is proving to be incredibly stressful for the one-time hustler.

Details about his former life on the streets is now common knowledge, his life with Riley is under a magnifying glass, and his past is about to step out of the shadows in an even bigger way. Can a rookie in the ways of the press and professional athletics survive the pressure of sharing his life with the league’s most famous gay player? Will the tentative new love Riley and Keiffer share fold under the weight of fans and fame?

Benji is ‘the' skater in the league who brings down the height average. Coming in at five eight, he's used to players chirping at him all night about his height.

Including the sexy defenseman for the Carlisle Rush, Avery Lester, with his stunning eyes and his cute smile.

When Benji makes a single inappropriate comment about Avery's ass, everything goes to hell. Add in Avery’s heroics during a hate crime, and things just go from bad to worse.

Abruptly it's not his height Benji has to worry about, but the chance that his closely guarded secret is shared all over the Internet.

Can love find a way, or will keeping secrets tear Benji and Avery apart?