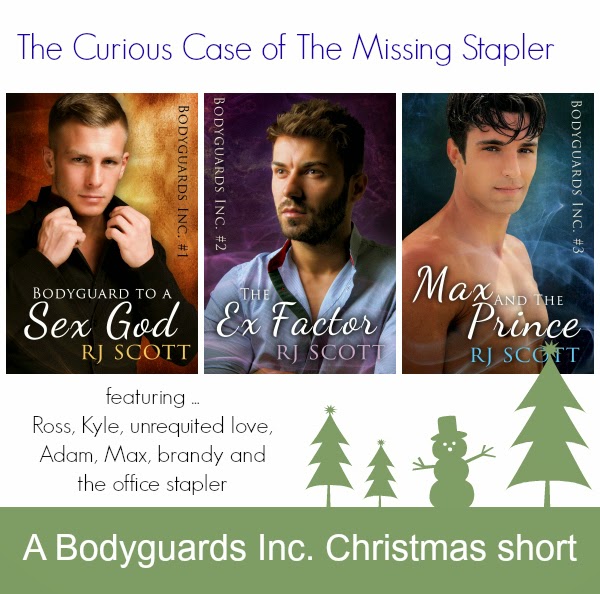 Set after The Ex Factor, but before Max and the Prince.

Adam slid the glass across the table, then snatched it back at the last minute.

“What the hell?” Max Connery snapped as he tried and failed to capture the small crystal tumbler of brandy.

“I need to see some ID,” Adam deadpanned.

Max shook his head. This joke was getting so old now. “I’m twenty-eight, asshole,” he muttered. “Now, give me the damn brandy.”

“Give him the brandy,” Ross said from his desk. “He’ll need it.”

Max closed his eyes briefly. He knew he should have stayed at home where it was safe. Lonely, but safe from Adam and his practical jokes and from new jobs being assigned. He’d promised himself a sabbatical, and from the way Ross just spoke, added to the fact he was waving a folder, there was a job for Max.

“I was having the rest of December off,” he groused. He made a grab for the brandy, but Adam had the skills of a ninja and he pulled the glass just that little bit farther along the desk. “I know how to kill people,” he muttered. Adam simply raised a single eyebrow, then smirked before finally pushing the glass closer.

Max held out his hand. He wasn’t falling for the expression of innocence on Adam’s face. “You’re a child, Freeman.”

Adam handed him the brandy. “It’s not me that gets carded in clubs.”

“I don’t know how Logan puts up with you.”

Adam widened his eyes and leaned in conspiratorially. “It’s the sex,” he said.

Ross huffed loudly. “Excuse me, but is anyone listening to me?” he asked.

Max nodded. He was listening, but he was also sipping on smooth brandy and the heat was leaving a satisfying warmth in his mouth. He hated that the very thing that made him a useful bodyguard also subjected him to ridicule from the guys when he had to hand over ID more often than not. He couldn’t help his baby-soft blond hair, his big blue eyes, the long eyelashes, or the heart-shaped face. Nor could he help the fact he was only five nine, which, in the world of bodyguards, was impossibly small. He was only a few months from twenty-nine, yet he passed for twenty. Hence his specialty as being able to blend in with younger clients.

Horror filled Max. “No, Ross, shit, not another Max-is-a-student job.”

Ross tapped the folder on the desk. “You know you’ll enjoy it once you get there.” Max watched Ross’s gaze follow Adam as the other bodyguard strolled out of the office and into the small kitchen. Ross frowned, then looked down at his desk, patting his stapler gently. Even though he’d be on a job as undercover student, which he hated, Max couldn’t help the laugh that left his mouth. Adam was all about hiding Ross’s damn stapler, and Adam’s hiding places were getting more and more ingenious.

Kyle poked his head out of his office. “Ross, can I get you in here a minute?”

Ross immediately stood, folders in arms. “You staying for a while?” he asked Max.

“You going to brief me on the job now?”

Ross shook his head. “Come back in the New Year. This is one hundred percent confidential, and I haven’t even spoken to anyone. It’s all in Kyle’s head at the moment.”

“I’m grabbing a lift from Adam.”

Kyle opened the door to let Ross in, and Max would have to be blind not to see the way Kyle scanned every inch of Ross. This one-sided office lust was hard on Kyle because to anyone that watched him he was clearly head over heels for Ross and the PA was oblivious. “Merry Christmas, Max,” Kyle called.

Max raised his glass in salute. “And you, boss.”

Adam came back with a large bowl of something, and the scent wafted towards Max. “What is that?”

He settled the bowl on the middle desk and stared into it thoughtfully, before stirring it with the large metal spoon.

“Everything. Wine, brandy, orange juice, other stuff.” He ladled some into a glass and handed it Max. Max expected him to pull it back, but clearly Adam had something else on his mind.

Max sipped it and coughed at the fiery brew. “Holy shit,” he said as he coughed.

Adam picked up a glass and helped himself to some before sipping it. Then he nodded. “It’s missing something,” he said. Then he looked thoughtfully at Max before snapping his fingers. With a quick glance at the closed office door, he reached over and grabbed Ross’s stapler. Without ceremony, he dropped it into the bowl, splashing a little on the desk. Then he stirred it again. The office door opened and Adam grinned at Max.

Grabbing his jacket, he stalked out of the office, throwing a happy Christmas over his shoulder, and Max cut his losses before Ross realised what was happening.

He was almost at the car when he heard the shout.

“Adam, you wanker! Where’s my stapler!”

Max jumped in the passenger side and Adam gunned the engine, the wheels spinning in the gravel as they left. When Adam had to pull over at the end of the long road to the house because he was laughing too hard to drive, all Max could do was watch with a smile on his face. These guys at Bodyguards Inc were his family. An odd dysfunctional family, yes, but still a family.

A family he could rely on. Not like his own at all. 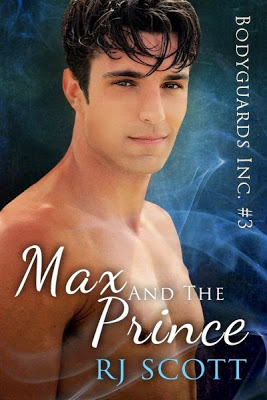 Bodyguard Max Connery is used to being mistaken for being younger than he is.

When a threat is made on the life of a prince attending University in the UK, Max is the perfect choice to blend in with the mixed house of students and to keep Prince Lucien safe. Even if it means joining the swim team to be by his side.

But, when death visits the halls, abruptly this job is a long way past keeping the prince happy and safe. Instead Max has to keep Lucien alive.