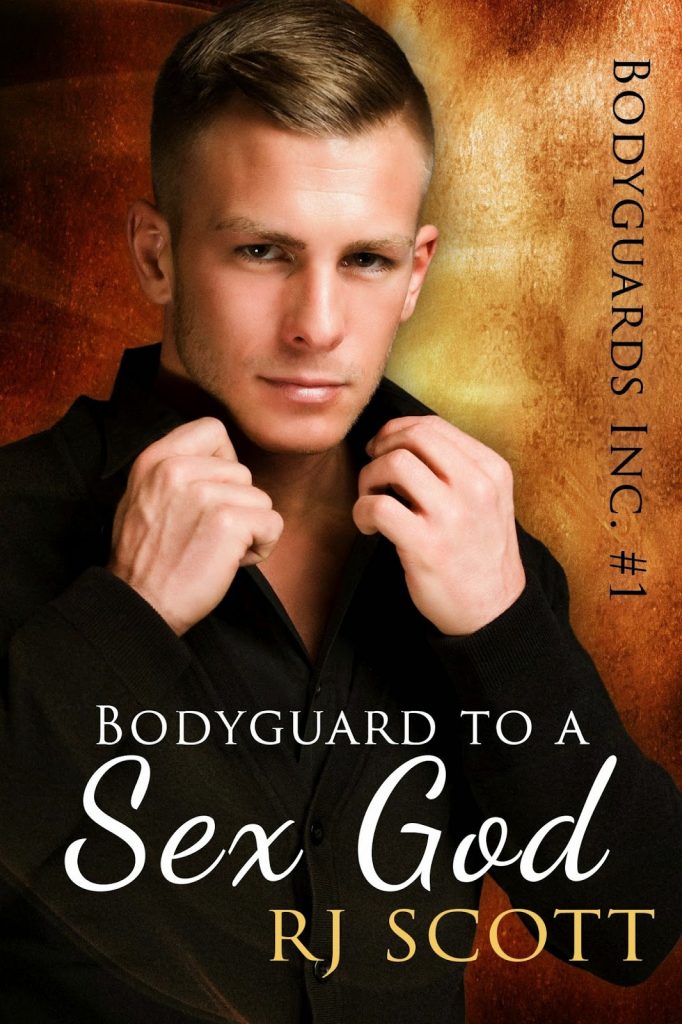 To celebrate the release of Undercover Lovers on the 31st July let's take a look at where the story began for Bodyguards Inc.

Bodyguard Adam Freeman draws what everyone else thinks is the short straw at the convention for a procedural cop show – as bodyguard to TV actor Logan Brady. Or as the Internet has labelled him, Logan ‘Sex God' Brady.

Logan is taking part in a convention at a London Hotel for his show ‘Night Cop' and someone is threatening his life.

Adam gets more than he bargained for when his client combines coming out of the closet with them both trying to stay alive.

“….Body Guard to a Sex God by Rj. Scott is crazy good. Not only are the main characters strongly written, so are the sub characters. The writing makes it very easy for the readers to feel what the characters are feeling.  This is a fun whodunit lite read that will keep you guessing until the very end. Just when you figure it out, the game changes….”

UK Gay Romance – 5/5 – “….Body Guard to a Sex God by Rj. Scott is crazy good. Not only are the main characters strongly written, so are the sub characters. The writing makes it very easy for the readers to feel what the characters are feeling.  This is a fun whodunit lite read that will keep you guessing until the very end. Just when you figure it out, the game changes….”

Mrs Condit & Friends Read Books – 4.5/5 – “…..There are plenty of plot twists to keep you guessing to the very end, including one I didn’t see coming. I don’t want to give anything away so I’ll leave it there and wrap up by saying that I can’t wait to see more in this series….”

Prism Book Alliance – 4.25/5 – “….This seemed a really fast read and I couldn’t put it down until I had finished. It’s a real page turner that will keep your attention up to the end as working out who is the stalker is not easy as it appears, everyone is stalking him! The attraction between the two men is red hot and as much as Adam tries to remain professional he is drawn to Logan who has never had a proper relationship before. Logan is sensitive and compassionate with a small group of trusted friends who just needs a keeper and he wants desperately for that person to be Adam.

This author always gives us hot MC’s that it is very easy to fall in love for and this one was no different. Despite closets, knives, hospital trips, stalkers and living on different continents these two men fall fast and hard and seem determined to prove that insta-love exists. Now I will wait patiently to see if Ross will finally have his eyes opened!!  Roll on Book 2….”

Chapter 1
“Hey, Blondie.”
Adam Freeman showed the office manager his middle finger at the familiar and detested nickname and then crossed to the coffee machine. He was tired and just this side of irritable and Ross Jackson knew exactly which buttons to press to wind Adam up big time. Adam hoped the middle finger would be enough to get Ross to shut up, but no such luck.
“That kind of morning, eh?” Ross offered with a laugh. He sidled up to Adam and bumped shoulders, causing Adam to curse under his breath when hot coffee splashed his hand. “It’s only gonna get worse.”
Adam needed this coffee. He lived on the opposite side of London from Bodyguards Inc., and the traffic on the motorway had been murder, even this early in the morning. He couldn’t fault the premises—a converted barn on the land of the manor house Kyle Monroe had inherited six years ago. But he could definitely fault having to battle every commuter in the city just to get his briefing.
“How can anything be worse than an hour stuck on the M25?” Adam asked wryly. Then he really wished he hadn’t. Sitting down behind his immaculately tidy desk, Ross leaned back in his chair with his long legs in front of him and his hands behind his head. He was the picture of nonchalance yet had an air of knowing something that Adam didn’t.