Be My Valentine – Featuring characters from The Alpha's Homestead Series

Caleb didn't notice anything was amiss when he entered the cabin. He was too fixed on stripping off the heavy coat that had been keeping the icy wind from freezing his bones. The homey smell of venison stew and dumplings meant he couldn't get the thing off quick enough as he growled under his breath about how he wished spring would hurry. They hadn't had snow in a couple of weeks but the temperature was so low everything was frozen and covered in a layer of ice. Including himself.

When he was finally free of the coat and it was hung up to dry, only then did Caleb realize that things weren't as normal as he'd first perceived. The children were all sat around the table as Jacob served each with a bowl of stew, but Ephraim had his fist pressed against his mouth, trying not to laugh, while Martha glared at him. Thaddeus was sat stock still, not his usual squirming self. Even Jacob smiled slyly at him as he walked past to fetch their dishes from the kitchen.

Caleb didn't say anything. He narrowed his eyes at his mate but that just made Jacob smile even wider and shrug his shoulders. It was only when Caleb walked around to his chair at the far end of the table that he saw what all the fuss was about.

Lowering himself down to sit, the chair creaking under the sudden and considerable weight, he adjusted the cutlery laid out before him and tilted his head at the white envelope leaning up against his cup of water. “Well,” he said and cleared his throat, “what do we have here?”

The deadly silence filling the cabin was only marred by the sound of the wind outside and Ephraim trying to chuckle without being heard, which ended when Martha kicked him under the table. Ephraim covered his pain with a cough, then said with surprising conviction, “It arrived for you today, Papa. Just showed up on your desk.”

Caleb shot him a look of gratitude and sighed dramatically. “Whoever delivered it must have been awful stealthy to get in the house without any of us noticing.” He picked up the envelope and turned it around in his hands. It was small and somewhat creased at the edges like someone had held it a little too tightly. And on the front, in red Franklin crayon, was scrawled the word, Papa.

Jacob appeared at Caleb's shoulder, waiting until Caleb raised his arms before sliding a plate of food in front of him and then taking his place at the opposite end of the table. “I was a bit concerned about that myself.” He sounded casual but there was a hint of humor in his voice that made Caleb want to smile. Jacob picked up his spoon and leaned over the table to cut up the dumpling on Thaddeus's plate. “But then Tad and I talked it over and we figured they wouldn't try it twice. Isn't that right, Tad?”

Thaddeus was a statue and, with all eyes suddenly on him, could only manage a single nod, doing everything he could to not look in Caleb's direction. Caleb couldn't ever think of a time when Thaddeus had been so still. Even in his sleep the pup kicked and fussed and wriggled, as the bruises on Jacob and himself could attest. Everyone else seemed to be finding Thaddeus's sudden quiet amusing, but it made Caleb want to gather the boy up and never let go.

Figuring that it would be better for everyone to put the little one out of his misery, Caleb sighed and used his butter knife to rip open the envelope. “Well, best see who it's from.”

The card was fancy. There was lace around the edge and what looked like real feathers, dyed into bright colors stuck onto it too. And in the center, a picture of a full-cheeked Cupid, with a cascade of blonde locks holding up a banner adorned with writing.

Caleb cleared his throat. “I adore you. Be my Valentine.”

Ephraim couldn't keep the laugh contained any longer but he did his best to disguise it as a coughing fit. Jacob played along, slapping him heartily on the back but that didn't stop Thaddeus from quietly slipping from his seat and sidling up to Jacob's chair.

Jacob scooped the boy up, letting him seek solace against his chest and holding him tightly. “What a nice inscription. Who is it from?” He sounded sincere but when Caleb glanced up at him, Jacob's eyes were worried.

Caleb turned the card over. What he found was familiar. Jacob's carefully penciled print with Thaddeus's haphazard lines trying to trace over the top in the same red crayon. The one that Thaddeus only used on very special occasions.

“From a secret admirer.” Caleb felt a knot form in his throat and had to swallow hard to push it away. “It seems my Valentine wants to remain anonymous.”

The room was very still for a minute. Caleb couldn't tear his eyes away from the words. Thaddeus's attention span was like a grasshopper, pinging from one thing to the next without warning, but it was clear that he had sat and worked very hard to follow Jacob's instruction and write out the words himself. But the small boy seemed mortified, curled into Jacob's embrace, his breath shuddering and verging on tears.

That was until Martha said, matter-of-factly, “I bet it's from Mrs. Leyland,” before taking a slurp of stew from her spoon.

Ephraim barked out a laugh. “Not on your life. I think there more chance it's from Reverend Peter!”


Martha shook her head. “Are you simple? No, Mrs. Leyland, for sure.”

The bickering had the desired effect and Thaddeus gradually unfurled his grip on Jacob's shirt, watching the exchange continue with wide eyes and an ever-widening smile as he figured that maybe he hadn't been found out after all. That was until Caleb tilted his head and mused quietly, “What about Jack Carter?”

Jacob's mouth dropped open and he raised his eyebrows. “The architect?”

Caleb shrugged and carefully propped the card back against his mug. “I don't see why not. He certainly seemed very friendly.”

With that, Thaddeus growled and scrambled down from Jacob's lap, pounded around the table and launched himself against Caleb's side. Caleb smiled and hoisted the boy up, saying, “Well, whoever my Valentine is, I think they have excellent taste in cards.”

Thaddeus knelt in Caleb's lap and grasped Caleb's face with both hands. Thaddeus pushed his face close and whispered, “You like the van'tine, Papa?”

Caleb whispered back, “I think it's beautiful, Thaddeus.” He kissed the beaming boy on the cheek, and then slapped him gently on the behind. “But I think we should sit in our own chairs and eat our dinner before it gets cold.”

It had taken a while to settle Thaddeus down, but Jacob descended the stairs with a smile on his face, and a tease in his not-so-serious question. Caleb shrugged and replaced the Valentine in its spot on the mantel. He turned and leaned his shoulders against the beam, crossing his feet at the ankle. “Are you denying that the man was handsome?”

Jacob laughed. “Definitely not. It's just that I met his delicate wife and can say with certainty that you're not his type.”

Caleb shrugged again, then pointed over his shoulder with his thumb. “Was that your idea?”

Jacob shook his head and slumped down into the rocking chair. “Nope. That was all Tad. Ephraim bought a card with his allowance, and once I explained what they were for, of course, he had to get you one.”

Caleb frowned. “And who was Ephraim buying a Valentine for?”

Caleb pushed himself away from the fire, taking the scant few steps to Jacob slowly, then lowered himself to settle between Jacob's feet. “Is—Is this something we should do now? Give cards and favors? Because it didn't even cross my mind. I'm sorry.”

Jacob smiled, languidly reaching his hand out to scratch his fingers through Caleb's graying beard. “You have my heart every day, Mr. Fletcher. If I need a card to tell you that, then I'm doing something wrong.”

Caleb raised himself up, and leaned forward, laying his body against Jacob's until their lips met. “I adore you,” Caleb whispered, then kissed his mate, relishing the feeling of their bodies stirring against each other even after all those years.

Jacob smiled against Caleb's lips. “In that case, I think you should take me to bed and show me just how much.”

As a token of my love and affection, I’m happy to giveaway ebooks of Home Is Where You Are to the first five readers to email me – contact@alexjane.info 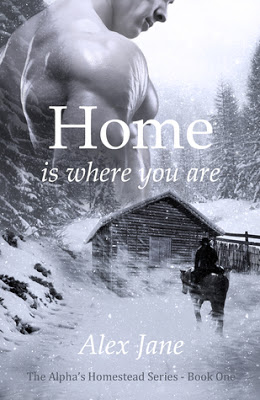 By the winter of 1870, Caleb Fletcher has carved out a sheltered existence for himself in a simple cabin, outside a small town in the backwaters of Nebraska, resigned to living out his days as a solitary wolf. But his quiet life is interrupted when another werewolf lands on his doorstep on the eve of a snowstorm, brutalized almost beyond repair, with nowhere else to turn.

When Caleb reluctantly welcomes Jacob into his cabin, and eventually his bed, it forces him to face up to the traumas he’s been running from; the shame that made him leave his pack behind, and the horrors of war he endured.

As the weeks pass, it seems that Jacob’s arrival might not be the coincidence it first appeared. Jacob has an agenda. One that involves Caleb. And if Caleb agrees to it – if he can let go of his past and his prejudices – it will change Caleb’s whole world. Maybe even for the better.

Without a mate – a family, a pack – a wolf has no home.
But what if home finds you?

After spending far too long creating stories in her head, Alex finally plucked up the courage to write them down and realized it was quite fun seeing them on the page after all. Free from aspirations of literary greatness, Alex simply hopes to entertain by spinning a good yarn of love and life, wrapped up with a happy ending. Although, if her characters have to go through Hell to get there, she’s a-okay with that.
With only a dysfunctional taste in music and a one-eyed dog to otherwise fill her days, Alex writes and walks on the South Coast of England—even when her heart and spellcheck are in New York.