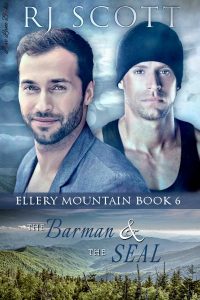 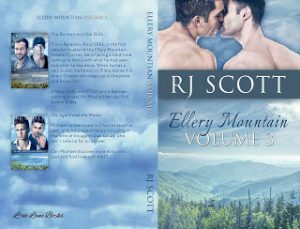 Because two men are better than one – 4/5 – “….The Ellery Mountain series is dear to my heart and this addition to the series didn’t let me down!

I was totally drawn into the story from the very first pages and found the beginning very emotional. It was so descriptive that I could feel the pain being experienced by Travis. This introduction to Travis provided insight into the experiences that had impacted Travis and resulted in him coming to Ellery Mountain to heal….”

Joyfully Jay – 5/5 – “….This was an emotional read for me.  I genuinely fell head long into this story and it was truly due to the way in which R.J. Scott so carefully crafted these two men into living, breathing people….  ….The author really took the time to focus just on these two men and draw out their story slowly, allowing us to see what was going on in their hearts and minds….”

The Jeep Diva – 5/5 – “….Ms. Scott delivered poignant drama through her writing and sensational story telling. Travis represented the countless men and women who are thrust into war, viewing unimaginable horrors and then returned to their homes expected to go on and pick up with life as if nothing happened. Ms. Scott offered no platitudes as she traversed Travis’s life through his hardships, especially his emotional state. She did not make light of his plight nor attempted to simplify his hardships by quantifying them in a story. What she did do was tell the tale of a man who suffered in war and how through self-determination, friendships, family, hard work and love a brighter future could be on the horizon….

MM Good Book Reviews – 4/5 – Ah hell, this has to be my favorite Ellery Mountain book so far with both Travis and Avery being incredible characters tugging at your heartstrings as their story unfolds. Avery is wonderful, so patient, and loving and he is the perfect man for Travis. Travis is a man torn by suffering, but he is incredible with his understanding of his own limitations but doesn’t let them rule him. Their relationship is slow but oh so powerful and the love they develop is especially strong because of the time they take as Travis begins to heal. While they fall in love, we see how well the Veteran Center is doing, we catch up with the characters from previous stories, and we see how Mikey is recovering from the brutal attack in The Paramedic and the Writer.

Multi-Tasking Momma 4/5 – “….Compared to the first five Ellery Mountain books, this was probably the darkest and most emotional. There were times when it was quite hard to digest what Travis had to go through. However, I see this as the beginning of the turn in this arc, when the Center finally gets to help those who need it most and plays a larger role. This means we will be getting more serious and complicated characters where in the beginning, we got the ordinary guys who had some problems but nothing as bad as those who will come into or out of the Center. This is a great sixth book for the series and I am glad to be following it….”

I recommend this to those who love damaged men pushing through their demons, support and love, a slow romance, incredible characters and a great ending that has you wanting Mikey’s story in The Agent and the Model….”

Mrs Condit & Friends Read Books – 4.5/5 – “….Hands down The Barman and The Seal by RJ Scott is my favorite book in the Ellery Mountain series. Well, I did really love Jaime and Ian’s book but this one just squeaks ahead….”

Rainbow Book Reviews – “….Avery and Travis were an odd pair to me. I couldn't quite see how it would work between them, but as I got to know them, they won me over. It was good to visit Ellery Mountain again and see the residents there I've grown to know and love, each adding their special flavor to the mix. At the rate their Friday night get-together is growing, they're going to need a bigger place to meet. It's all good though, a place where friendship reigns and fun is had by all. Thanks, R.J., for again tackling the PTSD issue and, as always, giving us hope and a happy ending….”

The cold was biting. The cutting wind carried ice and snow high up in the Salang Pass three thousand metres up in the Afghan Mountains northwest of the capital Kabul. Normally his captors covered him—they would tell him in their broken English they weren’t completely lost to conventions of how to look after prisoners. But tonight was different. From the vantage point in the centre of the camp, two feet off the ground in the small metal and wood cage, he could see them drinking and the campfire that warmed them was the only light in this small unsheltered area. Tents flapped in the wind and the raucous laughter was enough for him to know they’d probably stumble to their tents in drunken stupor. The SEAL wasn’t important. He called for help. No one heard him or brought over the tarpaulin that was his only protection against the night.He had curled over seven of his ten fingers when the sun rose this morning. Yesterday it had been six fingers to count the passing of time. Seven days in this place and the infections in his leg and arm were nothing to the rattling cough that had his chest squeezing in pain and his back in spasms. He shifted to find comfort and ended up twisted like a pretzel in the five-foot cube with his back to the worst of the snow. His cold weather gear, including his boots, had long ago been shared out to the rebels and he was left in combat pants, a tee and his thin under-jacket. Sneakers finished off the protection for his skin. He was fucked and he knew it. Even if someone got him out, even if any of his team had survived, he was broken in half by this place.

The pain in his back increased and he heard the inhuman whimper that left his mouth. He needed antibiotics and pain meds. Little by little his humanity was being stripped from him. He was dying—an hour at a time the ice was burning his skin and he curled his hands and feet so he wouldn’t lose them to frostbite.

Feebly he rocked in the cage, hoping the whole thing would topple on its side. Then if it crashed to the floor at least someone could possibly cover him from the snow and ice. A lethargy stole over him. He should be trying to get out, but there was no point. He’d seen the explosion, seen the mountain fall, crushing the team—he was lucky he’d been covering their six and his only open injury was the evil laceration from his knee to his ankle that now oozed pus and hurt like a bitch. All his equipment gone. Any hope gone.

He was sweating and bile rose in him, but his stomach was empty. He didn’t fight the retching or the pain—if he concentrated hard enough on home, on the hills and valleys of Virginia, then he could at least escape in his mind. He stretched his legs and the extremities of the cage held him solid. Pinned.

Then he woke up in a bed thousands of miles away. He couldn’t see the stars through the bars of a cage, or feel icy wind bite into his skin. He was safe.

“Hey,” Daniel said from the stove. Travis almost turned on his heel and left the kitchen. It was three a.m.—no one was supposed to be up. Especially not Daniel with his sensitive observations, his no-nonsense assessments and his damn understanding green-eyed gaze.

“Hey,” Travis said in reply. He felt like shit. The dream of being back in that place, with the pain—and the crying—had wrenched him from sleep. Again. He couldn’t remember the last full night of sleep he’d had.

“You want hot chocolate?” Daniel asked. He shook the tin of chocolate powder in front of his face and smiled. “I can’t promise cream and marshmallows like Luke uses, but I can mix hot water and powder.”

Travis debated. Saying yes meant Daniel and he would probably have to talk. Travis didn’t want to talk. His throat was still clogged with tears and his head and shoulders ached with tension. Damned sleeping pills weren’t even working if the terror in his head could drag him so sharply out of sleep. Sickness rolled in his stomach as the thought of chocolate hit his mind. Can’t even drink fucking hot chocolate. For fuck’s sake.

“I just came in for some water,” Travis lied. “Need to take some pain pills.” Why did he do that? Why did he even talk let alone elaborate. Yes, he could get water in his own room, but he could have got away with no more talking if Daniel had just accepted his excuse. But no—idiot—he had to go and mention pain. Daniel made that patented frowning face of his then nodded. The frown was so quick it was blink and you miss it, and though Travis may well be a fucked-up, washed-up ex-SEAL, he still had the ability to read expressions in a millisecond.

“Cool” was all Daniel said. He didn’t push on the pain meds or the fact Travis was awake or that he probably looked like shit. He was soaked through with sweat and he knew from looking in the mirror that his face had a gaunt, haunted look. Five weeks he’d been here in the middle of freaking nowhere at this place and every single night he’d had these dreams. Afghanistan would never leave him—the scars on his body and in his mind a permanent reminder.

He crossed to the sink, pulled down a glass and filled it with water. Then quietly and with a soft goodnight he left the kitchen and made his way back to his room. A hot drink would have relaxed him maybe. His mom had this way of adding cinnamon to hot chocolate and he needed that connection. He’d talked himself out of his room on the promise of finding god damned cinnamon.