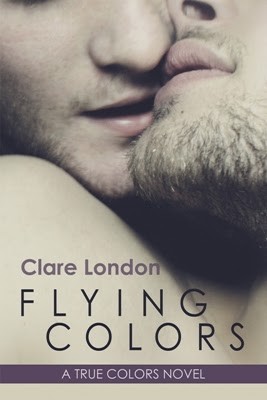 It's no secret I love Clare London's writing, she's on my favourite authors list for a reason!

This book is the fifth in a series and the stories are recommended!

Which is why I can not believe I didn't post this last week! I lost the b****y email… *blames Gmail*

So, Clare, I apologise and here is your post…

“Come and look around the center,” Carter said. It was empowering to say what he wanted for a change, rather than what he thought he should. He wondered sometimes who set those restrictions on him, if not himself. “See if it really is something you’d want to be involved with.”

“That’s great, I’ll do that. And soon.” Red chuckled, his first expression of genuine happiness all evening. It was enchanting.

Carter felt a sudden leap of excitement. Without stopping to investigate the feeling, he leaned forward a couple of inches and caught Red’s chuckle in his mouth, pressing his lips on Red’s. He tasted garlic, red wine, and stray raindrops. He thought he’d kissed Red before—maybe just a social kiss, on the cheek, or in the air in that ridiculous way Zeke kissed his sponsors?—but it was nothing like this. Nowhere near as rich, and sudden, and poignant as this.

Red tensed up, just for a second, then relaxed into the kiss. He didn’t grab at Carter, or tug him nearer. He just put his hand on Carter’s arm and held him. Carter felt the warmth from Red’s body through his coat, through his clothes, and through his own veins. It was heady. He’d often wondered what it’d be like to kiss Red De Vere: he was honest about that with himself. It was different from anything he’d imagined, and yet a hundred times better. Red’s mouth was tender, his hand firm but not possessive. Had Carter thought Red would throw him to the pavement and fuck him there and then? Red had never made any secret of wanting him. And there were all those mad stories in the glossy papers that played Red out to be a wild child, a sexual predator. But when Red slid his other hand behind Carter’s neck, it was a gentle touch, a guidance rather than a grab. He kissed Carter slowly, savoring him. Carter let his tongue dart into Red’s mouth, tasting him more. Craving him more.

“Maybe not such a bad evenin’ after all,” Red murmured against Carter’s cheek. His lips kissed the edge of Carter’s mouth. Carter could feel Red’s smile against the skin.

Carter gave a soft laugh. He felt extraordinarily light—relieved, even. He let his head rest against Red’s, their foreheads touching. A few stray raindrops pattered lightly on his neck. For a few moments, their breathing matched, the soft panting slowing to a steady warmth.

Available in print and ebook

Clare’s currently working on a novella where Felix meets a ghostly friend Bryn – after Bryn pinches his bum on the late night bus! Then there’s a series of romances set around an ice cream shop in the centre of London, and a futuristic detective novel bringing two alpha characters together from either side of a city controlled by the state. 2014 is a busy year as always – and hopefully very prolific LOL.

Clare took the pen name London from the city where she lives, loves, and writes. A lone, brave female in a frenetic, testosterone-fuelled family home, she juggles her writing with the weekly wash, waiting for the far distant day when she can afford to give up her day job as an accountant. She’s written in many genres and across many settings, with novels and short stories published both online and in print. She says she likes variety in her writing while friends say she’s just fickle, but as long as both theories spawn good fiction, she’s happy. Most of her work features male/male romance and drama with a healthy serving of physical passion, as she enjoys both reading and writing about strong, sympathetic and sexy characters.

Clare currently has several novels sulking at that tricky chapter 3 stage and plenty of other projects in mind . . . she just has to find out where she left them in that frenetic, testosterone-fuelled family home.

Find details of her publications and plenty of free fiction at her website, including an invitation to her mailing list. Visit her today and say hello!

One Night – Special Offer for November with 25% off