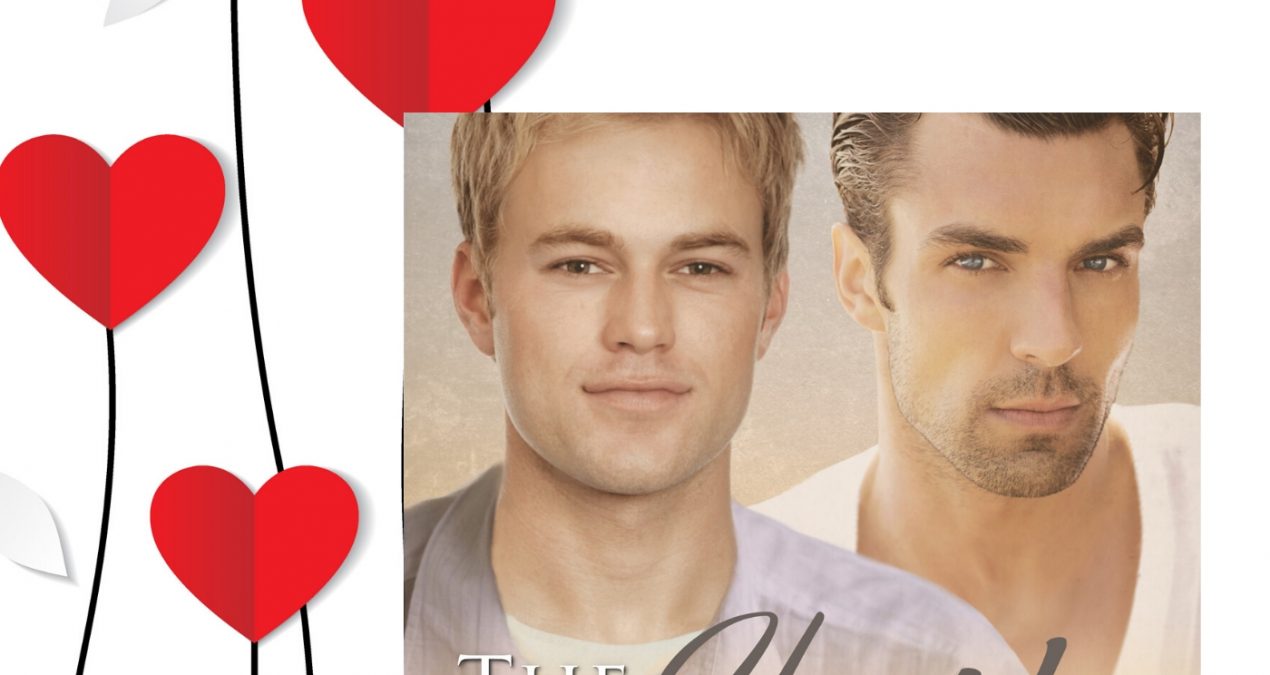 Valentines short featuring Jack and Riley from the Texas Series

Set three years after Texas Wedding (so, after Kyle, not that the Legacy Ranch is mentioned anywhere!). I wrote this a few years ago and thought it deserved to be posted again…

More information on the Texas Series

There was a lot of things that Jack adored about Riley. Not least of which he was tall and strong. Also that he had this way of manhandling Jack when they made love, that had him so hard he could probably draw patterns in Texas dirt with his dick.

Then there was his hair, all flicky and styled and blond and just long enough to hang on to when Riley was on his knees sucking him like blow jobs were going out of fashion. And his eyes. Jack could talk for days about Riley’s eyes.

They were hazel, but that simple word was never going to be enough to describe the way they changed when he was happy, or sad, or wearing that ridiculously bright lime green shirt he insisted on wearing when he made cookies with the twins. They weren’t brown, or green, they were somewhere in between and flecked with amber, and when Riley looked at him, Jack couldn’t help but stare.

He had muscles that had only gotten more defined as he worked at the riding school in his spare time, and despite spending hours with paperwork in their small office, he somehow managed to keep ridiculously toned. Acres of smooth sun-darkened flesh spread over a body that Jack could kiss and bite all day.

But all of that, the way Jack worshiped the bits of Riley’s body he could explore so readily. The hipbones, the V down to his groin, the treasure trail that pointed to heaven, it was all on display after he’d turned to sleep on his back.

“You’re staring again, freak,” Riley murmured. He opened one eye and looked up at Jack, but it was too dim in the room to see the beautiful colors.

“What can I say, you’re my inspiration.”

“What were you thinking about?”

Riley huffed a laughed and shut his eye, raising his arms above his head and stretching. “Not sure how to take the fact I am the inspiration for your horses.”

Jack moved a little closer, wriggling until he slotted under Riley’s arm, his head on Riley’s chest. Strong hands gripped him, and he closed his eyes.

“I was just thinking about all the things I like about you,” Jack said.

Riley tightened his grip momentarily, a laugh catching in his chest. “Was it a long list?”

“What about my six-plus feet of muscles and my incredibly beautiful cock?” Riley deadpanned.

Jack pretended to think for a few seconds. “Nah, it was just the eyes.”

In a smooth move, Jack twisted and straddled his husband, knees pressing against his thighs, and hands flat on the pillow either side of Riley’s face. “Fuck, Riley,” he murmured and leaned down for a kiss. “I love you.”

Riley got with the plan; they’d already made love as soon as they got in the room, but today was all about getting as much out of each other as they could before having to go home. Megan had stayed over at the DD to help out and the two of them, Jack, at first, reluctant to be away from the ranch, had booked a room in a hotel. Today was their Valentine’s Day, one of the rare moments when it was just the two of them. They kissed heated and fast, fighting as to who got to be the pushy one; Jack was winning until Riley used his height as leverage and had Jack pinned under him.

“My turn,” Riley whispered between kisses.

Every second together was explosive, a clash of passion and need that burned Jack from the inside. Jack had spent a leisurely hour driving Riley mad, slowly fucking him until he fell apart under his hands, but this was Riley, and this was different. This was fast and hard, and Jack winced at the burn of Riley pushing inside him. It didn't matter how much he stretched him, Riley was a big guy, and Jack focused on relaxing. Riley scooted up, enough that Jack could move, lift his knees, allow better access, and just enjoy being dragged to the point of no return. Mindless need stole his thoughts and for every second in the dim light of the early evening, he watched Riley’s eyes, the amber flecks, the absolute focus on what he was doing.

“I fucking love you,” Riley muttered, his rhythm settling, the muscles in his arms straining as he moved. “And I love fucking you,” he added as he slowed even more and rested his forehead against Jacks.

“Harder,” Jack ordered. Then he added with a grin, “If you’re up to it old man.”

Jack had turned forty last year, Riley was still three years from the big four-oh, and Jack knew for a fact that any reminder of that fact would get Riley moving as Jack wanted. He didn’t need slow, he craved fast and hard, and something in Riley’s eyes, awareness, an understanding of why Jack was goading him, meant that this was probably what he was going to get now.

Riley stilled, used his thighs to position Jack exactly how he wanted him, and then quirked an eyebrow, “You sure, old man?”

Riley didn’t hold back, Jack coming from the sheer power and force of what he was being made to feel. When he lost it, he shouted, and Riley swallowed the noise in a kiss. Riley finished just after, his orgasm enough to wipe him out, so he ended up sprawled on Jack, the weight of him pressing Jack into the bed. Jack didn’t care, he was floating, wanted to be held down, needed to know he was wanted every second of the day.

They cleaned up in the huge two-man shower, both too fucked out to do anything more than kiss and hug.

“You know I stare at you some mornings, watch when you wake up,” Riley admitted. They’d dried off and sat on the bed cross-legged eating the buffet on a tray that had arrived a few minutes before.

“I know you do. Freak.” He repeated what Riley had called him, and they leaned in to kiss each other.

“I love your body, and the way you look when you sleep, and you open your eyes and “they’re all blue sky and promises that I am going to have the best day ever,” Riley said.

Jack flushed hot with embarrassment. He was in touch with his feelings, could wax lyrical about Riley all day, but to hear Riley talk about him like this always made him shy. So he did what every red-blooded Texan did when faced with discomfort. He focused in on his steak.

The kitchen had seemed relieved at the average order. Two steaks, rare, on one plate, and a separate salad for one. They’d probably had worse orders on Valentines'. Jack imagined they’d had to deliver a lot of strawberries, chocolate, and cream to all the couples doing the horizontal mambo in this hotel.

“You want some of my meat?” Jack asked with a smirk. He held up his fork with a cube of pink steak there and waited for Riley to give the standard reply.

“I always want your meat,” Riley said with a lascivious wink. He took the steak from the fork, licking his lips at the juicy meat.

Jack groaned and looked down in amazement. “No,” he said, talking directly to his interested cock. He looked at Riley and frowned, “stop it,” he said.

“What?” Riley said, all wide-eyed innocence. He drew a finger through the salad dressing and sucked it clean.

“That. Doing all that sexy shit, all the time.”

Riley let his finger leave his mouth with a pop. “Okay,” he said. “As long as you stop riding horses, cleaning stalls, walking around the house in old worn jeans, and brushing your teeth provocatively.”

Jack couldn’t hold back the laugh. “How the hell can you clean your teeth provocatively?”

Riley shrugged, licking more dressing from his finger and looking thoughtful. “Everything you do turns me on.”

They kissed again, a lazy tangle of tongues and breath, and every kiss was a promise and a moment of love.

Then Jack remembered what he’d forgotten the first time they made love. “I have something for you.” He leaned over the side of the bed and opened his night bag, pulling out the wrapped gift. He placed it between them and couldn’t help feeling shy about what he was giving Riley. They’d come so far since the day that Riley had blackmailed Jack into marrying him, a long journey and one filled with drama, love, and always with the promise of a future.

“What is it?” Riley asked, eager and interested. He picked up the slim flat box and shook it a little.

This could be the best thing, or the worst thing, that Jack had ever done. Riley had never once expressed an interest in doing something like this, but Jack wanted to, and maybe they could do it together.

Riley slipped off the wrapping and placed it carefully to one side, before opening the box and lifting out the piece of paper inside. He looked puzzled, tilting the paper this way and that, and then he lifted the card out under it with the name and address of a tattoo place not far from the hotel and abruptly it seemed to make sense to him.

“You drew this?” he asked, his eyes a little damp.

“I was just doodling,” Jack said a little defensively, explaining away his lack of artistic talent. “But it’s two hearts, with dates for the kids, and the day we met, and when we got married, like tiny little lines of numbers from the hearts.” He was aware he was rambling a little, well a lot. “Because, now Hayley’s gonna be eighteen in September and I realize it’s the start of the kids maybe leavin’ us one day, and I want them, and you, marked on me, here.” He pressed his hand to his chest.

Jack’s chest tightened. “Doesn’t mean you have to do it, too.”

Riley dropped the design and the card to the bed. “Today. We should do it today. Did you make an appointment?”

Riley cut off his words with a firm kiss, then leaned back and pressed a hand to his chest. “Here sounds good. Then people could see what was inside my heart, right there on the outside. I love you, Jackson Campbell-Hayes.”

Jack smiled then. He couldn’t help it, Riley didn’t think he was sentimental, or stupid, he loved him, and Jack was the luckiest man alive.