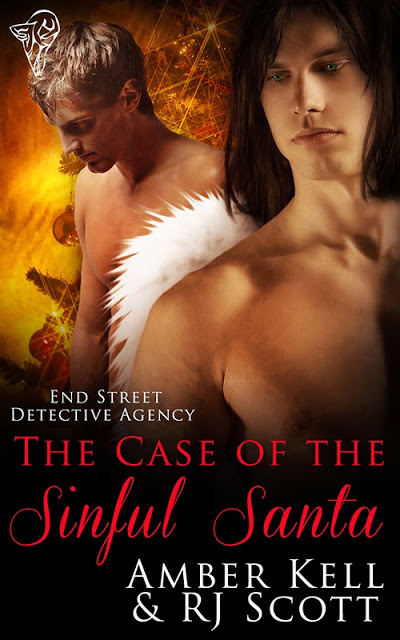 Zephariel, the Angel of Vengeance, Nick Klauson, nephew to Santa, Christmas magic, zombies in the school and a necromancer causing chaos…and at the centre of it all—Mal.

Zephariel is the Angel of Vengeance and is tracking down his cousin Danjal for misuse of brimstone. When he walks into a bar and finds Nick Klauson drowning his sorrows, he is instantly drawn to him. Could this be his fated mate?

When Nick and Zeph join forces to deal with zombies in Mal’s school, sparks fly. Add in a demon, a wolf and a necromancer, and Sam and Bob have a hunt on their hands.

“….I really do enjoy this series and how it’s progressing. You never know what we will face next, what interesting characters we will be introduced to, or what new problems will arise….”

The Novel Approach – 4/5 – “….I love this series by Amber Kell and Rj Scott. Not only are there some pretty cool paranormal beings, but the interaction between them all is very entertaining. There is a great mystery, some hot lovin’ and even a bit of humor. I can’t wait for the next book in this series. Maybe we will FINALLY find out exactly what Sam is….”

MM Good Book Reviews – 4/5 – “….I really do enjoy this series and how it’s progressing. You never know what we will face next, what interesting characters we will be introduced to, or what new problems will arise. And we can’t help but wonder when poor Sam will get an actual paying case that doesn’t end up involving him, Bob or Mal in some way. Zeph and Nick make interesting additions to the little group of friends and they bring that extra angst as they face down those uppity Angels and they get a surprise visit….”

Mrs Condit & Friends – 5/5 – “….The thing I like best about the End Street series is that it doesn’t. End, I mean. This is book four and there are already hints about future stories. Bob and Sam still rule the roost, but the other characters from past books make an appearance, too, rounding out the cast and making for a heck of a read….”

The Jeep Diva – 4/5 – “….Ms. Scott and Ms. Kell have opened up a paranormal world not only of adventure but of very “human-like” people who love and trust each other and have banded together to form their own unique and special family.

The way Bob adored Sam was priceless and melted my heart. Zephariel and Nick were loving mates who would do anything for each other, including becoming human, if needed.

What I like best about the series is the progression the authors take the reader through. A journey of love and intrigue, where one book ends and the next begins. Best read in order to follow the story line, the End Street Detective Agency is worth the time to read….”

Paranormal Romance Guild – Penelope Adams – 4/5 – “….Once again the duo of Kell and Scott skillfully take us into the world of fantasy, erotica and humor with a little bit of Christmas magic thrown in for good measure. We’ve met Sam and Bob in previous novellas and fell in love with their give and take. Each new book takes us a little deeper into their world, introducing us to new characters and giving us new insight into old familiar ones. These two authors write as one, and if the reader didn’t know better they would swear they were hearing the story from one person….”

Paranormal Romance Guild – Gloria Lakritz – 4.5/5 – “….Amber Kell and RJ Scott have written this fun tongue-in-cheek fantasy series that I cannot get enough of… The give and take of the characters and the double entendres are written by very quick-witted authors with a sense of humor that is fun to read.

….I know this is February, and the holidays are over, but it would be to your benefit as it was ours to look into this wonderful series and wait along with us for another installment of “WHAT IS SAM?’…..”

Nick Klauson pushed open the door to the tavern and climbed onto a seat in the back corner where it was dark and he could be alone. He needed somewhere to lick his wounds and this place was as good as any. The barman—woman? Nick could never tell with satyrs—waited expectantly and Nick didn’t keep him or her standing there long. He didn’t have to think about what he was going to order.

“Whisky. A bottle. One glass,” he said firmly. He waited for a reaction and was vaguely disappointed when there was none. The whisky was old, the crystal tumbler bright and there in front of him was the means to forget who he was for a few hours at least.

“Do you want any food?” the satyr asked. Her features coalesced into a feminine shape and she batted her eyelashes at Nick. If she only knew how freaked out Nick was to see a paranormal being able to change sex at the whim of the person they were with.

“Do I look like I want food?” Nick snapped. “If I’d wanted food I would have ordered it.” He stopped as he realised the residual anger from his last showdown with the family was spilling over into spite and irritation. “Sorry,” he mumbled before swallowing another mouthful of burning alcohol. He wiped his mouth. “Bad day.” Bad year. Bad life.

The satyr leaned over the bar, giving Nick an eyeful of newly fashioned creamy breasts in a low-cut top. “You look stressed,” she began with a low purr. “I can help you with that if you have the time.” Evidently the satyr was reading Nick all wrong. The alcohol was burning in his system and he clung to the buzz as long as he could. Unfortunately his family had this damn gene that meant they didn’t stay drunk for long. Sometimes he hated that…sometimes he wanted to drown in the haze of contentment and just stay there for an hour or two.

“Wrong…uhm…” He waved a hand at her breasts.

She chuckled and in the weirdest, unsexiest, most obscene way ever, she morphed into a male. Nick nearly choked on his whisky. The male bartender was so the absolute opposite of what Nick wanted in a guy. She…or he—or whatever the satyr was—had chosen a small blond twink of a thing. What he was faced with couldn’t have been more wrong. Nick loved his men big and dark-haired and strong enough to drag him to bed.

“Better?” the satyr said in a soft voice.

“I’m not interested,” Nick said quickly. “That isn’t what I came in for.”

The satyr reached out a hand and touched his cheek, startling him back on the stool. “Shame. You’re soooo pretty.”

Nick pulled away from the satyr’s reach. “Uh. Yeah. Just the whisky, thanks.”

“Are you really sure? I can be anything you want me to be.”

“Can you be a way out?” Nick snapped then regretted it. The satyr eyed him with confusion then opened his mouth to answer. “Never mind,” Nick interjected. “The whisky is fine.”

The satyr moved away and morphed as he walked, back into the buxom blonde. Nick could feel the disappointment emanating from her. He hated that. Not only was Nick the only skinny one in the family, but he had a broken form of the family trait of empathy. Not a useful skill when the only emotions he was capable of reading were misery and disappointment. He couldn’t even get empathy right. And as for ho ho freaking ho…

“Is this seat taken?” a voice rumbled to his left. Irritation flooded Nick. This was a big bar with a lot of spaces to hide, why would someone want to share his?

The owner of the voice chuckled and the sound cut through Nick’s melancholy. That was one low, sexy noise. He looked sideways and got an eyeful of man. Big man. Huge. Maybe six-four to his five-ten. Wide, solid, with dark hair, and even in the dim lighting at this end Nick could see the man’s eyes glint with amusement. Nick squirmed in his seat. Why had he said yes? The man, or whatever he turned out to be in this mixed human/para bar, was clearly interested enough to choose to sit next to Nick. Add to that Nick had a whole afternoon to kill.

“When I said yes, I meant no. No one is sitting there.”

The man looked down pointedly at the fact he was already perched on the stool anyway. “Then I’ll stay,” he concluded.

The satyr behind the bar moved over to serve the new guy. Nick blinked furiously. The alcohol had clearly got to him because he could swear the satyr was morphing from male to female and was at times stuck as a bearded sixty-year-old man with the biggest chest he’d ever seen. He shook his head and concentrated on his whisky. He was obviously losing it big time.

“Zeph Constantine,” the big man introduced himself and held out a hand to shake.

They shook hands and Nick winced at Zeph’s grip. Firm, maybe a little too firm. The shaking went on for some time. Neither man released his hold. Finally Nick realised he was still holding Zeph’s hand and embarrassment flushed his face. Thank the heavens they were in the gloom so Zeph didn’t see the tell-tale signs of Nick’s classic awkwardness around hot men.

“What brings you to the city?” Zeph asked as he sipped on what looked like water but could well have been vodka for all Nick knew.

“Toy convention,” Nick answered immediately. Then his mind went blank. What else could he add to that one? That was his cover story and he hadn’t spent any time embellishing it to be able to give details.

“I’m a statistician,” Nick lied on the run. “I look at trends in toy sales to support company marketing.” So it wasn’t actually lying, but he had fudged a little there. His actual job was to visit toy fairs and determine trends, but he was also there to investigate areas with any pockets of residual despair—the parts of the city and the surrounding countryside where there was a lack of joy. Not that he would tell sexy here anything about what he really did. His job description was a little screwy, but that was what he did and he did it well.

Share on PinterestShare on TwitterShare on FacebookShare on Email
Amber Kell, End Street Detective Agency, The Case Of The Sinful Santa, Total-E-Bound
Share :

Leave a Reply to Claire Cancel