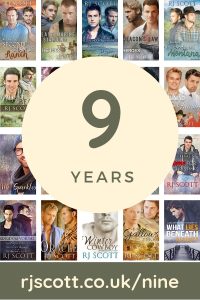 Today, 22 March, is my nine year anniversary of being a published author. My short story Ascension was in the Brush of Wings anthology with DSP. It was the first thing I'd ever written for publishing, and I was so lucky they liked it enough to include it. The short story became the inspiration for Angel In A Book Shop.

I'm now on book 120 or something like that – I lose track with things being republished and removed and put in volumes, but yeah, with translations and audio I have 160 works out there, if not more. It's been one hell of a ride.

I thought I'd ask myself what are the things that I never knew but which I know now? What would I tell my 2010 self about being an MM writer?

It doesn't matter if you get 1s in reviews, a four will come along any minute to balance it out. Statistically we, as writers should be getting on average 3s, and anything 3 and above is good. So RJ, a 3 or a 4 is a GOOD THING, okay? And a 5 is freaking awesome. One day, around 2012, you will accept this and stop angsting.

RJ, not everyone will like your 60,000-word emotional gut-wrenching paranormal angst with links to ancient Greece. On the other hand, most people will like your story about a throwaway at Christmas, so CHILL with the fact your first book, Oracle, isn't selling well.

Don't respond to that one-star review on Goodreads. Because the guy who wrote it is fishing for a fight, and boy will he enjoy that fight, and you'll end up looking bad.

Actually, don't visit Goodreads in the first place, because that shit will make you cry.

Sit the f**k down and write. Stop tearing out your hair about being crap and have some belief in yourself, you idiot. Just write.

Don't worry so much about people pirating your work – you can't stop it, so don't spend so much time worrying about it.

Get watching hockey. Now. Find out if Sky has a dedicated channel and start watching the games!

Relax your shoulders. Seriously, you're going to end up messing them up.

Invest in a better desk and chair so you don't mess your back up. Seriously, are you listening to me? And stop writing curled up on the couch, because that is just wrong.

Never be afraid to ask where your money is the minute you sense something is screwed up.

No, you don't need to write *normal stuff* you DO write normal stuff, ignore the idiots who say otherwise.

To celebrate my nine years – win NINE ebooks from my backlist – Nine winners will win nine ebooks each. That is nearly the entire Texas Series, it covers all of Montana, nearly all of Sanctuary. Or maybe you'd like random books from any of my series!

Slap and Tickle (With A Kick #3) – Clare London

Leave a Reply to ButtonsMom2003 Cancel