When we were looking for a new house we had two important things we needed to find. The first and most important was that somehow we could convert a garage/outbuilding/set of rooms for Matt so that he would begin to learn to have his own space and be self-sufficient whilst still being with us. The second was an office for me where I could look out the window at something nice, instead of staring at a wall!

The first thing, we ended up in a three-story townhouse, converted the entire top floor, and Matt is happy as anything up there, with his kitchen/diner, a bathroom, and bedroom/study.

The second – well, I've taken over one of the bedrooms at the front of the house overlooking the park area. This is flood plain, for the river that is maybe a 200 ft from our house. Meaning that in winter when it rains/snows, the park often floods – it's okay, we're up the hill. You can see the view in one of the photos – and it never fails to inspire me! #BeautifulEngland

My desk – apart from my Mac, where I do all my writing I have the following:

My iPad with my journal/diary open

A mug (hopefully with tea in it)

My Alexa, who helpfully turns on the lights for me

Headphones – I always listen to music when I write, the same thing over and over until it just becomes background noise

Some of my sharpie collection (the rest is hidden from Matt!)

A mug of thin tip pens

A tray for paperwork

And of course, my Railers Chibi calendar

The eagle-eyed of you will notice it's still on February – don't ask – just know it's on March now.

I also have a sofa in the room, that is where I sit to proofread, or just basically read, and it will be where I sit when anyone visits and we watch something on the Mac (mostly me and Meredith LOL).

My bookcase has every single one of my current books in print, along with my Penguins figures, mugs, and the magic Alexa-lamp!

On the wall I have some Oscar Wilde quotes, an “oh look it's wine o'clock” plaque and also a framed signed picture from a Supernatural convention that I went to, and where I met lots of sexy men and women!

In front of my desk on the small piece of the wall there, I have pictures of my WIP book covers – very inspirational – I always work with the covers already done.

So that's it, the tour of RJ Scott's office…

And now you know 🙂 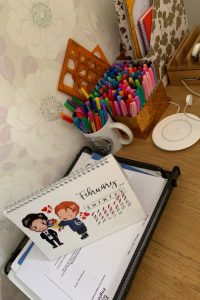 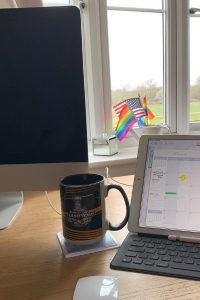 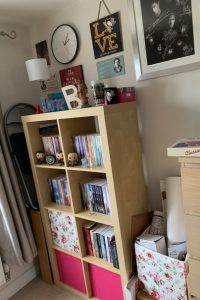