Today I'd like to welcome L.A. Witt to the Hump Day Hot Seat…

Car chases and sex scenes. Especially car chases. Sex scenes are hard — and they get harder the more I write them because after literally hundreds, if not thousands, well….they get harder. lol Car chases are just evil. In a movie, you get 78 camera angles to record all the action, but in a book, you get the POV of ONE character. And the action is really hard to convey clearly while maintaining tension and excitement. So of course my characters LOVE car chases.

What was the best money you ever spent as a writer?

The registration for my first ever convention, RT 2012. Cons have been huge for me as a writer, and that one was the con that got me hooked on them.

Oh God. So many. SO MANY. I have at least 30-40 in various states of completion, some of which will likely stay that way until the sun burns out. Others I'll probably pick up and finished. (Not Safe For Work and With the Band were both in manuscript purgatory for a couple of years before they were finished and published, so it does happen) Books that are finished but ultimately not published wind up in the scrapyard. Meaning I'll pull pieces from them and transfer them to other books. For example if a trunked book is set in Seattle, and there's a description of a particular part of the city, it might get moved into another manuscript and revised to fit the new character's voice. There's an entire action scene that was sliced out of a mostly-finished suspense novel and transplanted to a new one. Of course it's modified to fit the new story/characters, but hey, if it's a solid scene, might as well use it, right?

Depends on the book. For something historical, I basically research the time and place (Pompeii in ancient Rome, for example) until I keep seeing the same info over and over in the reference materials. (So like, I'm reading it and not getting anything new.) Then I'll start writing, and if I run into some detail I don't know, I'll look it up specifically. If it's a contemporary, I'll research anything I don't know (such as a character's job or a location), but oftentimes it's a setting/occupation I'm familiar enough with to start writing, and just look up anything specific as needed.

A squirrel. Hands down. Or maybe a raven since they like shiny things and mischief. But with the attention span of a squirrel.

For your chance to win a backlist ebooks from LA Witt answer this question….What would you choose as your mascot/avatar/spirit animal? 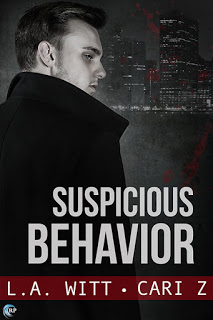 Detective Darren Corliss is hanging by a thread. In between recovering from a near-fatal wound and returning to work at a hostile precinct, he’s struggling to help care for his ailing brother. His partner and boyfriend, Detective Andreas Ruffner, wants to help, but doesn’t know how. And with his own family crises brewing, Andreas is spread almost as thin as Darren.

For cops, though, life takes a backseat to the job. When a stack of unsolved homicides drops into their laps, Andreas and Darren think they’re unrelated cold cases. But when a connection surfaces, they find themselves on the tail of a prolific serial killer who’s about to strike again.

Except they’ve got nothing. No leads. No suspects. Just a pile of circumstantial evidence and a whole lot of hunches. Time is running out to stop the next murder—and to pull themselves back from their breaking points.

L.A. Witt is an abnormal M/M romance writer who has finally been released from the purgatorial corn maze of Omaha, Nebraska, and now spends her time on the southwestern coast of Spain. In between wondering how she didn’t lose her mind in Omaha, she explores the country with her husband, several clairvoyant hamsters, and an ever-growing herd of rabid plot bunnies. She also has substantially more time on her hands these days, as she has recruited a small army of mercenaries to search South America for her nemesis, romance author Lauren Gallagher, but don’t tell Lauren. And definitely don’t tell Lori A. Witt or Ann Gallagher. Neither of those twits can keep their mouths shut…