My husband hates receiving gifts, but this year he came home on our anniversary and wished me a happy anniversary, and I'd completely forgotten! I felt terrible, so the next night, I surprised him with something he really needed: a set of gunmetal-finish iron gaming dice. Yes. We are that geeky.

Several. One that I've been wanting to write since college is an android who gets cross-wired with another android, so he can sense what the other will think and feel in different circumstances. This has the side-effect of making him care about another being for the first time since his creation.

Do you take a break from a first draft to get distance from it, dive right into editing, or edit as you write?

I edit as I write, or I find myself stuck. If I don't feel that the earlier parts are flowing smoothly, I can't go on. So I start the day by tweaking what I've written, the move on, sometimes going back to adjust things. By the time I reach the end of a novel, it's fairly polished. Not perfect, as my editor will testify, but in fairly good shape.

I just went back and counted. I have twenty-two stories in progress, at the moment. Some are nearly done. Some may never be completed. But I keep them all in DropBox, and drag old ones when new ones are finished. And of course I'm adding to it all the time. I've never had trouble coming up with ideas (*knock on wood*). My problem has always been finishing.


What kind of research do you do, and how long do you spend researching before beginning a book?

It's hard to say how long, because usually I decide to write about things I've been interested in for a while, so I've already read several books on the subject. I tend to start writing, and research as I need to learn things. Sometimes this slows me down, but often I'll realize that, say, the exact flavor and texture of Icelandic “thunder bread” isn't critical to the scene, so I'll bookmark it with a note in Word and move on to write the rest of the scene. Sometimes, as I've learned more about something, it makes it necessary to rework the scene. I had to rewrite the airport scene in A Viking for Yule three times, as I looked at maps of the airport and spoke with a friend who'd been through it. Another point: Google Maps is your friend. It's amazing what you can learn about the layout and look of a strange location through Street View.

For your chance to win A Cop For Christmas, answer this question…what's your favourite thing about the festive season? 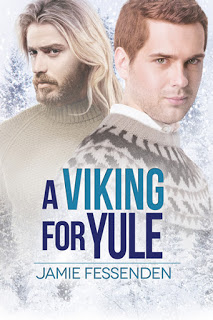 A Viking For Yule – OUT NOW
Buy Links: Amazon US | Amazon UK

After Sam's grandfather nearly died in a blizzard one year ago, Sam has panic attacks in snow storms. So where does his friend Jackie propose they spend the holidays, as the last stop on their trip around the world?

But there's more in Iceland than snow. When Arnar, a handsome Icelandic man, offers to escort Sam on a several-day tour of the beautiful countryside, they soon find themselves drawn to each other. But Arnar is firmly rooted in his native soil, and Sam has to return to the US in a week to care for his ailing grandfather. 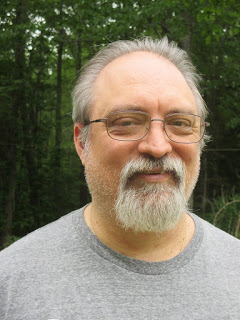 Jamie Fessenden is an author of gay fiction in many genres. Most involve romance, because he believes everyone deserves to find love, but after that anything goes: contemporary, science fiction, historical, paranormal, mystery, or whatever else strikes his fantasy.

Jamie set out to be a writer in junior high school. He published a couple short pieces in his high school’s literary magazine and had another story place in the top 100 in a national contest, but it wasn’t until he met his partner, Erich, almost twenty years later, that he began writing again in earnest. With Erich alternately inspiring and goading him, Jamie wrote several screenplays and directed a few of them as micro-budget independent films. He then began writing novels and published his first novella in 2010.

After nine years together, Jamie and Erich have married and purchased a house together in the wilds of Raymond, New Hampshire, where there are no street lights, turkeys and deer wander through their yard, and coyotes serenade them on a nightly basis.

Jamie recently left his “day job” as a tech support analyst to be a full-time writer.