Today we have C.F. White popping along for a chat…

What's the one story that made you lose sleep as a child?


The Lion, the Witch and the Wardrobe. It made me lose endless nights of sleep due to me constantly checking if my wardrobe lead to Narnia. I so wanted to be Lucy, although I remember having a massive soft spot for Edmund.


Finding the time! As a mum to two young boys, with the smaller one having a multitude of medical and additional needs, finding time in my day to write is the hardest part. It's usually the way that when I do have a clear schedule and can sit and tap away to my heart's content, the words and ideas dry up. I tend to get my best ideas when out and about doing the daily tasks and by the time I get to a laptop I've forgotten it. I've started to use iPhone notes to rush something down as and when but its not always possible. I have been known, however, to write a whole scene on my phone whilst in a hospital waiting room while my son wreaked havoc with all the toys. When you gotta write, you gotta write!

I also find that I can start a new book relatively quickly and know its ending, but the middle gets a little lost along the way. I am an awful planner. Its all stored in my head and I just let my fingers do the work when I do get to a laptop, which means I can sometimes go off on a tangent.

I have occasionally written out character bios but more often than not, the character is all in my head anyway and I know them like my own family which helps keep them consistent. I have had to have to odd nudge or two from my editor when one may be steering off a path that perhaps he wouldn't.

I have just finished Spun! by J L Merrow. She is my go-to author for m/m, I simply love all her books. She was the first author I ever read in the genre, so I guess she was my inspiration to have a go myself. As mentioned, I don't get a huge amount of time on my hands. When I do get time, I write. So to read is a real luxury and therefore I stick to authors I know. I have a massive long list of to-be-read of authors I haven't ever read before and would love to give them a go but I need to be marooned on a desert island somewhere to do it. Just for a bit. I'll read recommendations from friends etc. Before Spun! I read The Lure by Felice Picano on recommendation. Took me a while to get into it, especially as it was dated (written in the 70s) but I got hooked and was pleasantly surprised.

I'd say energize. I get really annoyed if I don't fit in at least some part of my day to write or edit a WIP. I feel accomplished if I've managed to squeeze in some writing. It may well be deleted the next day, but at least words were on a page for a while.

Luckily, the books I have currently written the main premise of the story is particularly familiar to me. I really am a terrible planner and I just want to sit and write, so research feels like its hindering me. Hence I started writing a subject that was extremely close to home to start with, therefore minimal research was actually needed. But I do have a list of books to write in the future that I know I will need to do some real research into certain subjects to do them justice. I'm up for the challenge at writing something that isn't so close to home, as I can then maybe create some healthy distance from it when it gets into the general public's hands – something I really am struggling with at the moment.

If you could tell your younger writing self anything, what would it be?

To keep going. I wrote several novels at around the age of 13/14. I sent one off to a few publishers and the rejections killed my teenage spirit. I gave up. I shouldn't have. It then took me another twenty-odd years to write again and now that I am published, I think of all the things I could have written in those lost years. So I'd tell myself to shake it off, make it better, and to keep calm and carry on.

Before I had children I loved to watch many TV series. Buffy, Supernatural, Lost, Heroes. All faves. I like shows that are complete escapism. I also have a real soft spot for superheroes. Then children come along and the chance to watch any TV that doesn't feature Peppa Pig or Horrible Histories becomes scarce. I was into Walking Dead for a long time but didn't get the chance to finish the season I was on then I heard far too much that had happened for me to want to carry on. Now, I have to binge watch on Netflix when I get the chance and the last two series I really got into was Stranger Things and 13 Reasons Why. Stranger Things was so well made. Set in the 80s full of nostalgia and always left me wanting more after each episode and the acting by all the kids was exceptional. I didn't expect to like 13 Reasons Why. It had been recommended to me but wasn't really the sort of thing I'd go for. To be honest, I'd probably have avoided it. It was a hard one to watch but I found myself continuing each episode. It really hit home about what teenagers go through these days and how bullying is so different now we are in the digital age.

Do you read or write fanfic? What is your favourite?

Nope! I had no idea what fanfiction was until I started writing on Wattpad. That's where my eyes were well and truly opened. I had no idea it was so popular to take characters out of well known film/tv/books and sometimes have them mix it up. It was the sort of thing I used to do as a teen but never knew where to put it. They remained in my notebook. That's what is so great about platforms such as Wattpad. Now people can share their love for a particular character/series with others who feel the same.

For your chance to win a print copy of Misdemeanor (Responsible Adult #1) answer this question…What are you reading now and what's on your TBR list? 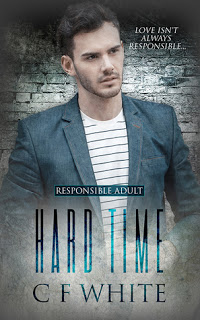 After Micky O’Neill is remanded in custody for breaching his court order, his already tempestuous relationship with Dan Peters is tested to the limits.

Having to battle their way through a court case that could end with Micky in jail, social workers breaking up the family home and the return of Micky’s deadbeat father, it seems everything is set to destroy their relationship before it even has the chance to start.

With such high stakes involved, not just for Micky but for once-burned, twice-shy Dan, they both have to learn that falling in love isn’t always responsible.

Brought up in a relatively small town in Hertfordshire, C F White managed to do what most other residents try to do and fail—leave.


Studying at a West London university, she realised there was a whole city out there waiting to be discovered, so, much like Dick Whittington before her, she never made it back home and still endlessly searches for the streets paved with gold, slowly coming to the realisation they’re mostly paved with chewing gum. And the odd bit of graffiti. And those little circles of yellow spray paint where the council point out the pot holes to someone who is supposedly meant to fix them instead of staring at them vacantly whilst holding a polystyrene cup of watered-down coffee.

She eventually moved West to East along that vast District Line and settled for pie and mash, cockles and winkles and a bit of Knees Up Mother Brown to live in the East End of London; securing a job and creating a life, a home and a family.

Having worked in Higher Education for most of her career, a life-altering experience brought pen back to paper after she’d written stories as a child but never had the confidence to show them to the world. Having embarked on this writing malarkey, C F White cannot stop. So strap in, it’s gonna be a bumpy ride…