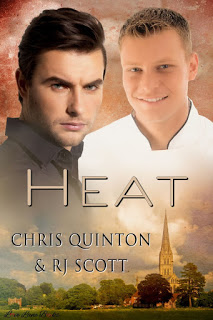 Chris Quinton and I have a new book in the Salisbury Series coming out on 1st July, and to celebrate, we're having a blitz tour for the first book in the series, Heat.

Serving up passion, family, love and hate, with a side order of arson.

Lewis has lost nearly everything, and now it seems that Devon is here to take the last thing he has left – working in his beloved restaurant, Laurels. But when an arsonist threatens everything Lewis loves, he realizes sometimes everyone has their ghosts, and he discovers an unexpected ally who is prepared to risk everything for him.

Set in the small cathedral city of Salisbury, Master Chef Lewis Mandineau no longer owns the Laurels, the restaurant that had been in his family for generations. Betrayed and robbed by an ex-lover, he's had to sell to Carnegie Enterprises, an American corporation. That isn't all Lewis has to contend with. Rachel, his beloved younger sister has been left severely hurt by the car crash that killed their parents, and taking care of her has to be his priority.

Enter Devon Trelawney III, sent to assess the viability of the restaurant and its staff. Devon knows all about family tradition. But he also knows sentiment has no place in business matters, and the Laurels' potential is swamped by the debts it has accrued. Devon is a hardheaded businessman, first and foremost, but Lewis and Rachel test his resolve in different ways. Soon Devon is forced to admit that what seems like an impossible love can sometimes become something very real.

Thank you to everyone taking part in the tour for Heat.

Per i pomeriggi di pioggia