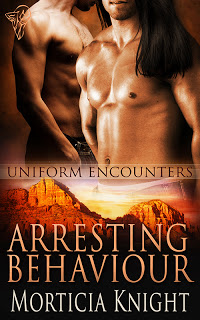 Thank you for letting me stop by your blog today RJ! 😉 And I have a few fun answers to share…

Character development is important to me when I read. I am always curious whether characters are based on people the author knows and research, or if they are based on pure fiction.

I love to people watch, and I’ve met a lot of different ones in my life. I mean, these people were real characters! But seriously, it really is a combination of both. I’m not going to completely take someone’s private life and put it on paper (or e-reader), but I like to add some real life quirks and nuances to make my characters more interesting and engaging.


How do you feel when it comes time to end the story? Sad? Happy? Relieved?
If I really love the story, it’s both happy and sad. I was heartbroken at the end of Arresting Behaviour, because I was head over heels for Quinn and Jake, and I just wasn’t ready to leave them. But I was happy that it was complete, and that I felt good about it. I was also relieved that I made my deadline!

Native American Quinn and Detective Jake come from two opposing worlds. But when opposites attract, the result is explosive.

The Bondage Butcher has just claimed his third victim, and newly promoted homicide detective Jake Gutierrez is anxious to speak to the one man who has been intimate with all three victims—Quinn Verdugo. The reclusive and mysterious artist and poet stays just out of Jake’s grasp, until one night when they catch him trespassing at his ancestor’s ancient ruins.

Quinn is devastated by the recent murders, and for the men he once dallied with. Not trusting his heart to anyone since a cruel rejection in his teens, he trusts the police department of Mesa, Arizona even less. He is determined to find the bastard who is committing these gruesome murders, and take care of things himself.

When Jake and Quinn finally meet face to face in the interrogation room, both men are startled at the direction things take. Agreeing to work together, they have no idea the dangers they have yet to face. But what is more dangerous – the murderer, or the spark that has been created between the two very combustible men.

*****
Excerpt
Maybe being alone was his whole problem. He shook his head, not in the mood to deal with any of this emotional crap at that exact moment, not with his neck on the line.

The door swung open and sure enough, it was the luscious cop. He looked at the ceiling.

I don’t need this right now.


Composing his expression to a blank slate, he lowered his head, and looked the man dead-on in the eyes. He’d found he’d been able to unnerve anyone with that stare. However, it didn’t seem to be working so well all of a sudden. The cop looked right back at him, clearly trying to hold that little curling smile at bay, the sexy dimple on his cheek threatening to appear at any moment.


Sensing a challenge, Quinn readied himself for the first parry. He would wait the guy out, not appear to be interested in anything he had to say, not ask direct questions, but allow him to spill his secrets. Quinn’s gaze narrowed, and the man gave him one quick peek at the dimple, then peered down at his notes before he sat—right across from him. In the tiny room. If Quinn stretched his long legs out, surely he would be able to hook his ankle around the cop’s foot. The thought of such an intimate touch with the officer caused Quinn to shiver a little, as if someone had just walked over his grave.

The cop glanced up from the papers he was so fascinated with, using just his eyes.

He didn’t answer. He needed to stick to his strategy.

Finally, he set the papers down and leant back in his metal chair, the epitome of relaxation.

Ooh, he’s good. I’ll just have to be better.

Quinn never let his stare waver. But neither did the cop.

“Well, Quinn Verdugo, I’m Detective Jake Gutierrez. It just so happens that my partner and I were assigned to The Bondage Butcher case.”

Detective? They haul them in young around here.

“Which is why I’m so interested in speaking with you today. It seems your boyfriend Cole thinks you might have something to do with these murders. He was so convinced, in fact, that he called us to come and save him since he thought you were luring him into the desert to tie and slice him up. I don’t know if you normally tie him up—he didn’t say—but maybe he just wasn’t into the slicing part. What do you think?”

“He’s not my boyfriend.”

What the fuck am I doing— Shut up!

“Oh, really? Because he insists that you two are quite the item. I think he even hinted that he might be moving in with you on the rez pretty soon, maybe have a little commitment ceremony…”

Bullshit.
This guy was provoking him. He needed to keep it together.

Gritting his teeth, Quinn broke the stare. He had to. He wanted to tell this cop—or detective—that Cole meant nothing to him, that he was just a lay and nothing more. He was having an inner battle to keep from spilling his guts to this Jake guy, for some bizarre reason not wanting him to think he had ties to anyone.

Ridiculous. He’s probably married with eight kids for all I know.


Quinn was seriously pissing himself off, and needed to get back in control of things. But he was tired all of a sudden. It was exhausting trying to keep his feelings clamped down deep inside him all the time. All of those emotions were like a long-dormant volcano building up to an inevitable explosion. There were the endless dalliances with young men whom he forbade himself to feel any connection with—although he knew he purposely picked ones where there wasn’t any danger of that. There was all the guilt and rage over the killings of his lovers. And finally, there were the recent stirrings of something whenever he thought about or looked at this so-called detective. He wanted to pick up one of the hinky chairs, and bash it until it no longer resembled any piece of furniture. Instead, he looked back at the man.

“Just tell me what you want from me so I can get the hell out of here.”

Available now at the publisher: here

And All Romance ebooks: here