Hi everyone! I’m so thrilled to be here visiting with you and RJ! Not that RJ and I need an interview to chat. We spend hours talking books, hockey, and generally gossiping every day. You wouldn’t believe the shenanigans we get up to. Then again…perhaps you would!

When I signed up for an interview I asked RJ if she were sure she was up to this. The last time she interviewed me we ended up writing a little book called Changing Lines and the rest is history! Who knows what will happen this time. Screenplay? Broadway musical? Tap dance tour of the US and UK? Gods only knows but whatever does spring forth from this I wager it will be a blast!

Now let’s get into the Q&A section for a discussion of my latest release, a gay historical western (bet you weren’t expecting that were you?!) The Ballad of Crow and Sparrow. There’s also a giveaway so make sure you read to the end!

I mentioned in the intro I have a brand new book out this week! And it’s not in the genre most expect from me. This one is a historical western. The Ballad of Crow and Sparrow was one of those flash of inspiration books that came to me while I was playing Red Dead 2, a video game set in the old west. While I was playing I wished that I could have a gay cowboy as a lead. My brain said, “Well write one!” and Crow and Sparrow were born the following day.

Now onto the Pick a Trio of Questions!

Probably not, but I am currently writing three contemporary gay western romances, the Prairie Smoke Trilogy. While I enjoyed penning the historical book the research was nearly overwhelming. But I never say never. Perhaps another brilliant idea will pop into my head and my muse will grab it and run with it.

I generally write every day for a few reasons. One is that I love writing! Truly, it’s just about the best job ever. Secondly is because I have a pretty busy release schedule and to keep up I have to write daily. But I do know that all work and no play isn’t good so I’ve been trying to cut back a bit here and there. So far I’m having so-so results with the days off but I’ll keep at it.

What’s the hardest type of scene to write?

This is a tough one. I really don’t mind writing sex scenes as so many other authors do. Action scenes are okay as well as I cut my teeth writing Marvel fan fiction so I know a thing or two about action! Probably the most difficult scenes for me to write are the ones where our hero/heroes are cut wide open emotionally. I’ve been told that I pour a lot of myself into my work and that is so true. So when my characters are suffering I suffer right along with them. I’ve had to walk away from certain scenes in books so I could gather myself. So yeah, those gut wrenching scenes do me in every time.

Favorite Movie – For romance Call Me By Your Name, for comedy Young Frankenstein.

Favorite Book – Too many to pick. Seriously, don’t make me choose just one!

Ideal Snack – Something that fills me up and tastes like vanilla coconut cake but has zero calories. It’s a dream snack I know…

Tea/Coffee – Coffee. All day every day no questions. 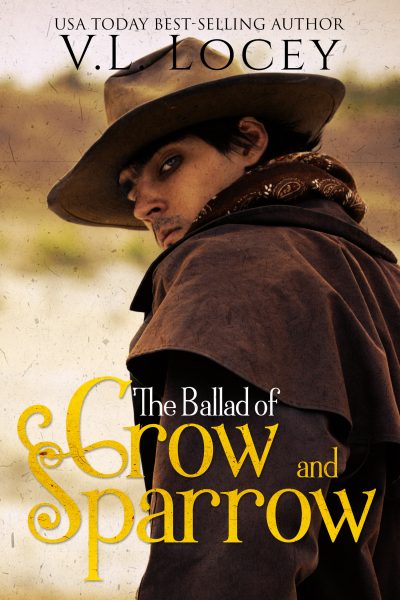 The Ballad of Crow and Sparrow – 11 May

Sometimes a man’s biggest blunder can turn into his greatest triumph.

Orphaned at fourteen, Crow Poulin now has to hunt and trap the White Mountains of Arizona, as his father had taught him, all alone. It’s a lonely existence, until one morning, while checking his trap line, Crow finds more than a rabbit in a snare. He stumbles across the outlaw Jack Wittington lying half-dead in the wilds. He takes the wanted man in, heals him, and in return for saving his life, the smooth-talking criminal invites Crow to join his family. Starved for human interaction and a father figure, Crow leaves the mountains behind for what he assumes will be a brighter future.

Six years pass. Crow is now a man, as well as a member of the Wittington Gang. He may be considered an outlaw, but his father’s morals are warring loudly with the lifestyle of his adopted family. When the gang decides to rob a train, Crow has no choice but to go along to keep a tight rein on the more bloodthirsty members.  It doesn’t take long for the scheme to go horribly astray.

Instead of gold-filled coffers, the gang finds Spencer Haughton, son of cattle baron and railroad tycoon Woodford Haughton, cowering in the family’s opulent private car. The outlaws grab the sickly heir in hopes of ransoming him off. Things then go from bad to worse for them when the law rides down on the Wittington hideout and Crow is given Spencer to hide until the ransom is paid. The pretty young man is nothing at all like anyone Crow has ever met before. Delicate, refined, well-educated, and possessed of a singing voice to rival the songs of the birds in the trees, Crow slowly finds himself falling for the winsome rich boy. But can two such opposite souls find the love they’re both seeking in each other’s arms?

When not writing spicy romances, she enjoys spending her day with her menagerie in the rolling hills of Pennsylvania with a cup of fresh java in hand.

One commenter will be chosen randomly to win a copy of any of my backlist books. To be entered answer the following: If you could travel back in time like Dr. Who what time would you like to visit and why?