This is going to be a big spring for me and my Hearts and Health series. The three-book series will grow by three more books, all before May. I’ve enlisted my husband, Lucas, to set me some strenuous deadlines to make sure I follow through. As a former journalist, I perform better with deadline pressure and the husband gets to think he’s bossing me around, so it’s win-win! (Don’t worry, I get to crack the whip on the hubby when he needs to design a cover for me; we’re equal-opportunity whip-crackers in this household!) 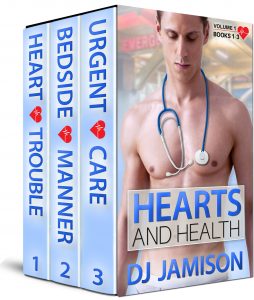 Coming Feb. 15, I’ll release a box set of the first three books to reach new readers and energize the series as the release date approaches for Book 4. Lucas designed me a gorgeous new box set cover for the release. 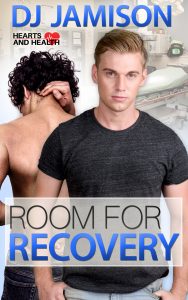 Coming in March, I’ll release Book 4, Room for Recovery. Here’s a peek at the cover Lucas created for me. This book tells the story of Wade, 19, and Beau, 18, two characters who appeared in secondary roles in Urgent Care, Book 3. After losing his father, Wade went off the rails for a few years. Now repeating his senior year of high school, he’s starting to wake up and come to terms with his sexuality and his attraction to Beau — but it won’t be an easy road to self-acceptance and a happy ending.

Also planned this spring, I’ll release Surprise Delivery, Book 5, and Orderly Affair, Book 6. These books will deal with other medical professionals or hospital staff who have appeared in earlier books in the series.

OTHER PROJECTS COMING IN 2018

For those who have read My Anti-Series, including My Anti-Valentine and My Anti-Boyfriend, I’ll be writing the conclusion to that three-part series, with My Anti-Marriage. Both novellas are available for 99 cents. The third installment is expected to be a bit longer than the first two.

I’ll also be continuing a new series, Real Estate Relations, that I launched in September. Book 1, Full Disclosure, is available on Amazon/Kindle Unlimited. The series is light-hearted mystery, with elements of romantic comedy. Book will be titled Buyer’s Remorse, and will feature Lee and Miguel, two characters who appeared in the first book. The third book has no title — or plot! — yet. Wish me luck!

If I get all that done, I’ll be extremely happy with my accomplishments, but if there’s time, I’ll throw in a novella or Christmas story, as well!